Last Friday night, a local radio station, Alice Radio (FM 97.3) put on a party they called Saraoke at Bimbo's in San Francisco.  It's a play on karaoke and the morning show host, Sarah's name.  She has a band called the Skyrocking Jennifers and they had the idea of letting people front their band karaoke style.  It was a BLAST!

The night was so fun.  First, I had the opportunity to meet Hooman, a radio personality with whom I have been corresponding on Facebook for awhile.  He has graciously agreed to come to our Lovely Rita fundraiser, so it was great to meet him in person before that event.  I also had brief interactions with Uzette, Vinnie and Icky.  All very nice, although Uze seemed a little stressed out.  Second, my friend Yolanda was picked as a wildcard out of the crowd to compete in the competition and she won her category!

So the night began with a band called Pop Fiction playing some covers.  Then the karaoke competition began.  They had four categories.  Male.  Female.  Duet.  Wildcard.  I have to say, I wasn't very impressed with the male category.  I watched everyone's videos on youtube and liked them all.  They just didn't pull it off when it came to the live show.  After a winner of each category was chosen, they got to sing a song with Sarah's band backing them.  The overall winners of the night were part of the duet category (and they got $2,000 for their trouble).  The ladies were probably not the strongest singers but they definitely put on a show!

I know there are quite a few complaints about song choices going around the internet.  However, from what I understand from Yolanda, their initial song choices were pretty limited (even though they had a karaoke DJ) and if you made it through to sing with Sarah's band, you had maybe 15 choices.  Yolanda had to pick a song for the finals that she didn't even know (and you didn't get the luxury of a screen with words once you got to that level).   So she was in the crowd on her iPhone trying to memorize lyrics.  Knowing this, I think she ROCKED it even more!!  Even though Yoli (as Vinnie was calling her) didn't win, she had one of the best voices and I was so excited for her!

Anyway, I have some videos (mostly of Yolanda...SO proud of her!!!).  They aren't the best videos.  I kept getting bumped into.  Had I known the videos would be so popular, I would have taken more!  Apparently the radio station liked my videos because they posted them on their blog!  Don't I feel cool!  :-D

Thanks to Patrick and Amie for hanging out with me all night!  It looks like Patrick has been to quite a few of these events because he seemed tight with Vinnie and Icky.  I look forward to the next event!

Unfortunately, due to this event, I missed a Twirly Girls event at Sapphire in Livermore.  I heard the girls had a really good time and I hope to make the next event!

After all of that excitement, I relaxed most of the rest of the weekend.  I had Twirly Girls on Saturday.  I am nursing a knee injury (I don't even know where it came from for sure).  I can't squat.  It hurts.  My hip is so-so.  Getting old is so fun.  I was supposed to see my friend's band play Saturday night but I knew I couldn't take another night of standing, so I stayed home to ice it.  Sunday, I went to yoga and then rode my bike with Rob around Alameda.  It was a gorgeous day to ride by the beach!

I hope everyone else had a great weekend!  Enjoy the Saraoke videos below!

Alice's blog with my videos.

Podcasts - Sarah and Vinnie - March 29th (where they talk about Saraoke)
(I understand they mention Yoli in here too!)
Lost 30:  They're talking about my videos!  hehe!!!
9 AM to 10 AM:  I texted to ask Vinnie why he didn't "present" his girlfriend so I could check out the competition for my friend who had a crush (about 7 minutes in)!

The Sarah and Vinnie Secret Show - All about Saraoke (a little less censored than the regular show).

Yolanda's first song, Give Me One Reason:

And the winner is... 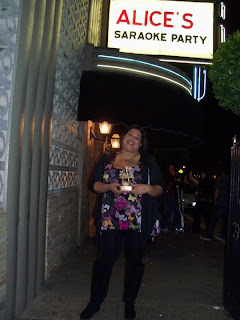 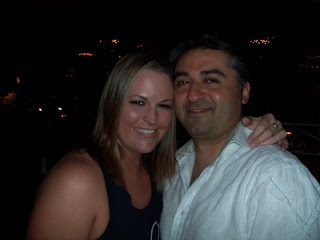