So this afternoon, I went over to a friend's house for a get-together.  There were a lot of familiar faces but a lot of new ones too.  I wandered.  I ate food.  I visited.  I played with the baby, Mason.

As the afternoon was winding down and people were starting to leave, they let the family pitbull into the house.  His name is Cain.  He's a gorgeous dog.  Very sweet and playful.  He wanted to play tug-o-war.  I played with him for a bit but he's really strong and kept ripping the toy from my hand.  He'd happily run back and put it back in though.  I would play for a few, but it felt like Cain was going to rip my entire arm from its socket.  So I started laughing and yelling, "Cain, you're gonna rip my arm off!"  Over.  And over.

A lady who had been sitting down most of the party got up and was standing near me and playing with Cain a little too.  We were laughing and chatting about what a great dog he is.  Suddenly I realize that her flowy shirt was hiding something.

SHE WAS MISSING AN ARM.

I almost died.  I had been screaming, "CAIN, YOU'RE GONNA RIP MY ARM OFF," for ten minutes.  I felt like such an idiot.  She never said anything or seemed to get upset about it.  I made sure I stopped.

Later, after everyone was gone, I was telling my friends and the family about it.  I told them how mortified I was.  They laughed until they almost pee'd their pants.  I mean, in a million years WHO would that happen to?!  ME!!!!!  I'm screaming about my arm getting ripped off and someone who actually LOST their arm (she lost it later in life, she wasn't born that way, I found out later) is standing next to me. 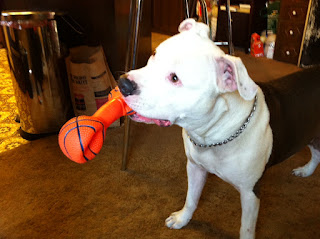 Posted by lolorashel at 4:46 PM