Update on the Misadventures of the Chilidog

Chilidog had another vet visit yesterday.  Check out the blog I did about Chilidog's condition here.

We learned how to give Chilidog subcutaneous injections of fluid yesterday.  That just means a shot into the skin.  We thought we'd literally be giving him a shot of water into the skin.  But we have a little IV bag of fluid with different kinds of needles for the IV line and adding potassium to the IV.  We have to do this every other day.

Chilidog was down to 6.5 pounds (a loss of about 0.3 pounds in a couple of weeks).  So, the plan of action is to keep him hydrated and help him stay interested in food.  We found out he LOVES tuna, so he'll be getting lots of tuna.  The protein isn't good because it gives him headaches but the juice is great because it has lots of omegas and keeps him hydrated.

We now have a "sharps" disposal container and bags of needles and bottles of fluid laying around the house.  We are like our very own little vet's office.  The supplies alone will cost us about $100 to $150 a month.

I mentioned on Facebook that a kitty kidney transplant costs around $30,000.  We aren't actually considering a kidney transplant or dialysis for Chilidog.  I understand that people think that what we are doing is already more than we should.  On one hand, I understand where they are coming from.  A lot of people selfishly put their animals through treatments to prolong their lives, but the animal is in pain and miserable.  And, I think if we were only doing this to make ourselves feel better, that would be one thing.  Chilidog isn't a sickly little kitty laying around waiting to die.  He's got a decent amount of energy and seems happy and not in pain at all.  His skin and fur look healthy.  His eyes are bright.  The vet said she had a cat that was around Chili's age (between 5 and 6 years old) and she did the same thing for her cat and he lived to 10 or 12.

Giving Chilidog the IV fluids will take about five minutes every other day.  He didn't struggle or act like the needle hurt him.  In fact, he was purring while we were holding him.  We don't have to find a vein or put it in the muscle.  We literally just have to poke his skin and give him some fluids.

Also, this isn't my decision.  Chilidog is Rob's cat and I fully support his decision to try to keep his cat alive.  Yes, it's going to cost us money and time, but he's a happy little cat and until his condition changes, I am willing to continue this plan of action and share my ice cream with him from time to time. 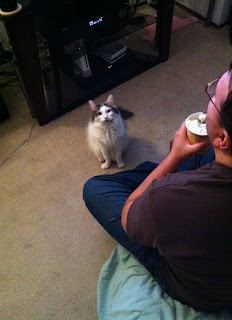 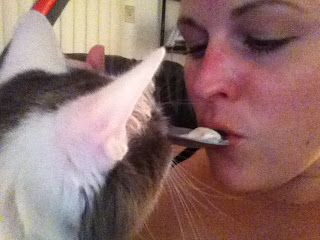