If you haven't been following the misadventures of the Chilidog, you can get caught up here:

On Friday (the second blog link above), I was saying how Chilidog wasn't a cat sitting around waiting to die.  What a difference a day makes.

I was housesitting Friday night and Rob called me Saturday morning.  He said Chilidog couldn't hold his own head up and would fall over when he walked.  He was also laying funny, with his head cocked to the side.  I called the vet to make an appointment and asked Rita to drive Rob and Chilidog to the vet (THANK YOU, RITA!!!).  I met them at the vet's office.  I hit some traffic and was scared they'd be putting Chilidog down before I could even get there.

The vet basically said that because Chili's potassium was so low, it was causing his muscles to contract.  Since he never showed signs of being sick in the first place, it was possible the infection had just ruined his little body, and we may have lost the battle before we even started.  His weight was still really low and, if we couldn't get him to eat, there wasn't going to be anything we could do to save him.  However, she said, he did seem like a little cat who wanted to live, so we didn't need to make a decision that day.  Within the week, though, we would probably have to consider saying our good-byes.  We went home, basically believing we would be putting Chilidog down within the next few days.

It was so rough.  Lots of tears and trying to spend as much time as possible with Chilidog.  We didn't want to let him go but we felt guilty that we were making him suffer.  The house even smelled like death -- and we were afraid that his organs were already dying.  We decided that Saturday and Sunday would be Chilidog's bucket list days.  We gave him as much tuna as he could eat, let him sniff around outside, sit in the sun and look at birds.  His energy was low and he was still hunched over, but he seemed happy to get to do those things.

We also decided to give him IV treatments daily (instead of every other day).  We figured it couldn't hurt and at least we would know we did everything we could to save him.

Sunday and Monday mornings, I woke up, fully expecting to come out to a kitty who had passed during the night.  Sunday was much like Saturday.  Chili was hunched over and looked miserable.  We had hoped to put off any decisions about putting Chilidog to sleep until at least Thursday.  Rob's birthday was Tuesday and I was afraid that we would be mourning instead of celebrating.

Monday morning, I came out and saw Chilidog curled up under a chair.  He didn't move when I came out.  I couldn't see him breathing.  It took me a minute to get up the courage to touch him.  I bent down and touched his head.  He popped up -- alert and upright!

I'll spare you the rest of the small (but exciting -- to us) details but Monday and Tuesday, Chilidog made a complete turn-around.  He's eating a lot, playing with Zeus a little, and even jumped into the window yesterday for the first time in probably over a week.  He's gained a tiny bit of weight (back up to 6.8 pounds), he even looks a little more filled out and his fur isn't as dull or flat as it was over the weekend.

We are giving him potassium and B vitamins orally twice a day, and his IV fluids (with pepcid and B vitamins) once a day.  At the end of the this week, we will go down to every other day.  He still doesn't even flinch when we insert the needle and sits still and purrs while the fluids are being pumped into him. Our house looks like a hospital with needles and bottles and an IV bag laying around.  I swear, though, my dreams of being a druggie have been dashed --  based on the amount of shaking my hands do when it's time to insert the needle.

So, I think our little Chilidog is going to stick around awhile.  We want to thank everyone who has been sending prayers and good thoughts our way.  It has definitely helped. 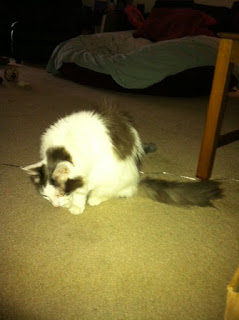 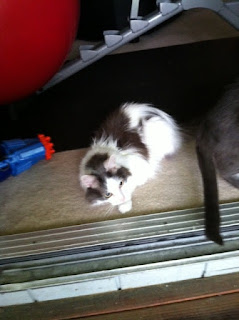 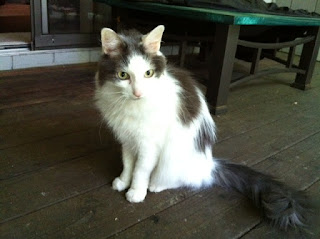 Email ThisBlogThis!Share to TwitterShare to FacebookShare to Pinterest
Labels: adventures of zeus and chilidog, cats, Chilidog