Chilidog update (hopefully the last one for awhile)

We took Chilidog for another checkup at the vet last night.  Catching him was fun.  Rob already had Chilidog in his arms when I picked up the cat carrier.  He jumped out of Rob's arms and promptly ran under a dresser, which is too heavy to pick up.  I tried spraying him with water.  He didn't budge.  So I had to find a spot my arm could actually fit into and drag his sad little ass out.  He was soaked with water.  Poor kitty.  I wish he realized we don't enjoy torturing him with vet visits and medications.

We had slowed down his medications and IV fluid treatments to see how well his body held up on its own.  Apparently he's doing ok!  The vet was so excited this morning that, after she got Rob's voicemail on his cell, she called the house because she wanted to talk to someone.  She said we can stop the Carafate (phosphate binder) altogether for now, which is awesome.  It tastes like cherry and Chilidog is NOT a fan.  And we can do his IV fluid treatments just twice a week instead of every other day.  We will continue with his potassium supplement but he doesn't seem to mind it.  His weight was up to 8.2 pounds.  We don't have to check in for another two months.  This is such a relief. 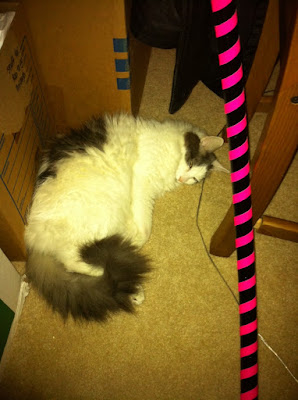 Email ThisBlogThis!Share to TwitterShare to FacebookShare to Pinterest
Labels: Chilidog