Right when you're about to get ahead...

So two Christmases ago, Chilidog got sick.  Not just sick, almost-died-sick.  His kidneys went out.  Dialysis and kidney transplants really aren't great ideas for cats.  We had to give him saline injections and medication.  First daily, then every other day, then twice weekly, then weekly.  A couple of months ago, we finally got to stop the injections.  He only needs some oral vitamins every day.  YAY!  Time and money saved.

You can read up on some of his adventures here:

I guess Zeus felt left out.  Rob started working last September.  I got a job in October that no longer allowed me to work from home.  Zeus got anxiety and started licking his hair off.  We took him to the vet for some prozac in December and the vet decided to give him a steroid shot just to make sure he wasn't having an allergic reaction.  She tells us there's a one in a million chance that Zeus could get diabetes from that shot.  Guess Zeus should play the lottery.

Right around Christmas-time, pretty close to $1,000 was dropped to save Zeus.  He went from 17 pounds to 14 really quickly.  That's how we knew he was sick.  Then his body went into ketosis.  He dropped down to 12 pounds.  He to spend a couple of days in the kitty hospital.  Unlike Chilidog, who wasn't going down without a fight, Zeus gave up pretty quickly.  Had Rob not taken a day off work to sit with him, he probably would not have lasted the day (that's the day he went into the hospital).

Trying to put a monetary value on a pet's life is really difficult.  Of course your pet is family and you don't just put down family.  But money is an issue.  We don't have $1,000+ hanging around waiting to be spent.  I really was just about to get ahead too...and then here we are again.

Zeus now gets insulin shots twice a day.  He's only a nine year old cat.  So I guess we're looking at many years of this.  Don't get me wrong, I am happy Zeus is doing ok.  We are about two weeks into his regular insulin shots and he finally has his appetite back and is playing like he used to.  He's also suddenly very cuddly with me (usually he's Rob's buddy).  Here are a couple pictures of him hanging out with me this morning.  Maybe this is how he says thanks.  :-) 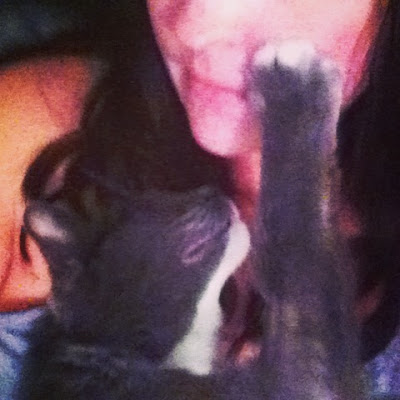 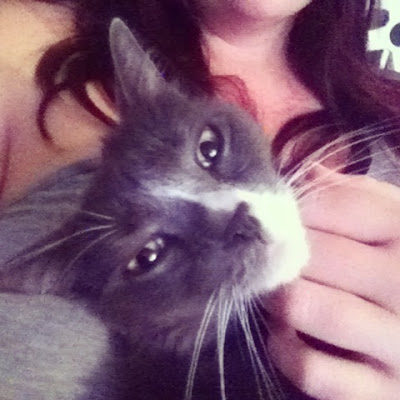