Shame on us all

WHAT IF we lived in a world where the first reaction to pretty much anyone we saw wasn't to figure out a way to put them down?

The fat girl in a bikini on the beach?  She isn't a "whale" who shouldn't be showing off her offensive fat rolls.  She's just a girl having the time of her life with her friends or family.

The homeless looking guy missing a leg in a wheelchair on public transportation?  He isn't a freak who smells badly and is taking up precious commuter space.  He's a veteran of war who fought hard so that you would have the "right" to sit there and judge him.

I'm a chubby girl and, until recently, my first reaction to other chubby girls wearing certain clothing was often to say, ohmygod, she should NOT be wearing that!!  Now, I try really hard to keep my judgment in check and give accolades for having the confidence to wear whatever the fuck she feels like wearing. 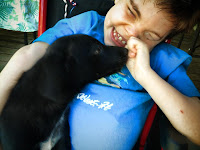 I have a severely disabled nephew who is eight years old but is unable to do pretty much anything for himself.  For eight years, my sister has essentially had an infant.  He is also the sweetest boy you will ever meet.  His smile lights up his entire face (and his man-farts can clear a room).  I am grateful that he will probably never understand people enough to know if people are calling him names.  He may be mentally retarded but he is not society's insult of a "retard."  He's just a little boy who had no control over the cards dealt to him in this life. 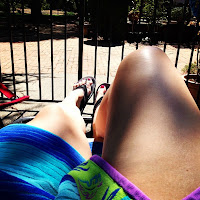 I had started the #myfatwashere campaign partially because I hoped that the more "regular" people see "meaty" people doing things, the more normal it will become.  If we can watch violent movies and video games and adapt to accepting that violence is normal, then we can look at fatties walking around wearing whatever they want and start accepting that too.  Your thigh is 18 inches around.  Mine is 25 inches.  We both just have thighs.

Try for a day to just watch your thoughts and see if you are judging people more than you realized.  It is so ingrained in us, we probably don't realize we are doing it.  Oh hey, that girl's outfit is cute.  Oh hey, that guy's gut is hanging below his shirt, gross!  Oh hey, that lady is fat and in a wheelchair, I bet she eats a ton of McDonald's!  Oh hey, look at that retarded guy, he's walking so slow and holding up this line!

I hate shame.  I hate that in my weight loss surgery support group when many members stop coming, it is because they have started gaining a little weight and they feel ashamed.  I feel like that's exactly when they NEED to be coming to our group!  Our self-esteem should NOT be tied to the scale, but for so many of us, it is.  And the judgments of other people help reinforce the thought that being fat is shameful.

I have been trying very hard to watch my thoughts and try to make them neutral at the very least.  I grew up in a church that bred judgmental behavior.  Even though I haven't gone to that church in 20 years, it was ingrained in me.  My mom was the worst offender.  She's gotten a lot better about it as I've gotten older and made it clear that I don't accept her judgments.  But I imagine she's just keeping her opinion to herself rather than changing her opinion altogether.

Do you feel like you judge people unnecessarily?  How about we do two things...if you're chubby, start putting more photos out there of yourself (stop hiding from the camera!) and whether you're chubby or not, start paying attention to your judgments of others.  Let me know how it goes!
Posted by lolorashel at 10:22 AM