No one likes to say they're on a diet.  But restricting calories and increasing exercise with the intention of allowing your body to consume itself to lose weight is still a diet.  "It's a lifestyle change!"  That's just a marketing genuis' new wording for "you're on a diet!"

I wrote about my slow journey before.  You can read that HERE.  Yes, I'd love to embrace health at every size and love my body at this weight.  But I don't feel healthy at this weight.  I'm in pain and, with my foot injury, my weight has been creeping higher and higher.  I often use sugary,  high calorie foods as a coping mechanism.  And THAT cannot be healthy.

So I quietly started counting calories in November.  I bounced up and down five pounds -- made it through the holidays without any weight gain (which is actually normal for me since I binge regularly, not just for the holidays).  Then I went on this steroid recently and dropped down to a weight I haven't seen in at least a year. 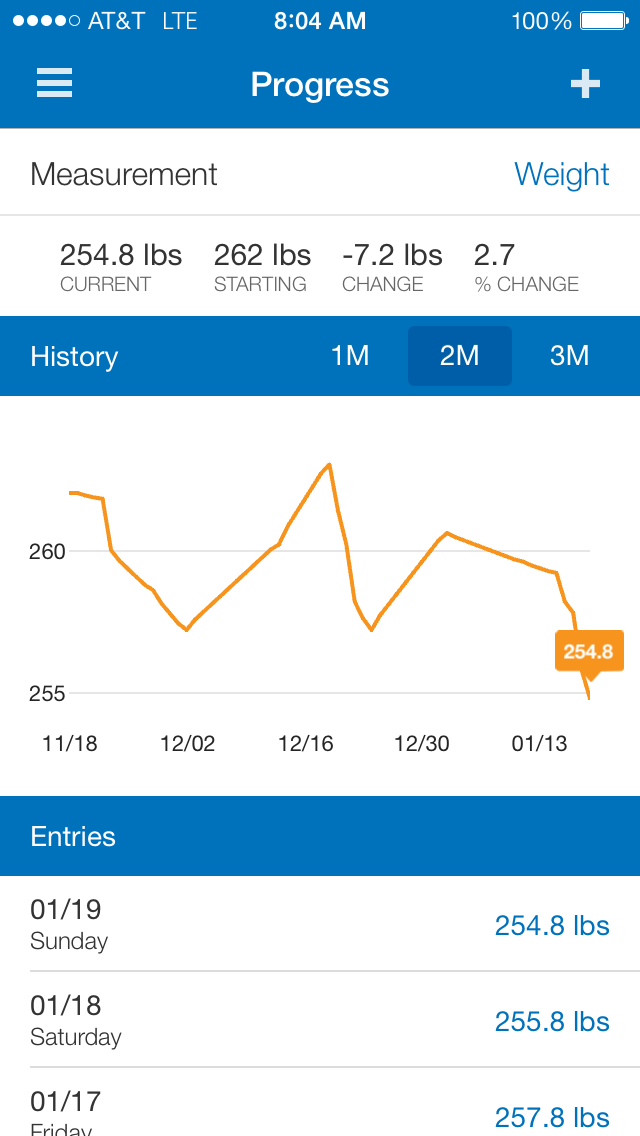 My weight has certainly been on a roller coaster -- my graph never has a straight line.  My highest weight before gastric bypass was almost 350 pounds.  My lowest weight was 179.  My weight started climbing a few years after surgery and I got up to 222 pounds.  I started over-exercising (but didn't limit calories) and took about 18 months to get back to 200 pounds in early 2009.  Almost as soon as I got there, I stopped exercising as much and my weight started to creep up again.  215 pounds when I met Rob in August 2009.  225 by the time I started Twirly Girls in December of the same year.  I was offered the "opportunity" to try a friend's diet products and quickly rose to 235.  By the time I started the job in San Francisco in October 2012, I was 252 pounds.  I did go down to 247 for a bit since I was walking more in San Francisco but the foot injury slowed me down (and my dislike of the job had me eating a ton of chocolate at my desk), so I jumped up to my highest post-surgery weight of 263 pounds.  That's a lot of weight to throw on your frame in a few short years.  Especially when you have plastic surgery scars holding things in and making your fat poke out of weird places.  I have been jumping between 257 and 263 for the last couple of months.  Currently, probably thanks to the steroid, I'm at 255.  My ultimate goal is to get to 240 then 225.  I like small goals.  Pole dancing and yoga put a lot more muscle on my frame than I had before so I (tell myself I) would be happy at 225 instead of 200 again.

I wrote about my search for my Resting Metabolic Rate.  You can find that HERE.  I had determined the number of calories right for my body to maintain its weight was 2,600.  I had cut them to 2,200 to try to lose weight.  I was eating the "right" number of calories and still not really losing (no, I wasn't forgetting to record things or underestimating calories...remember I've been counting calories my entire life).  A couple of weeks ago, I cut that to 2,000.  Suddenly, I was on the verge of a binge.  I watched it happen.  The "crazy" switch got turned on and I just knew my brain was about to flip out.  So I am putting myself back to 2,200.  I really don't want to exercise twice a day, which is how I lost the weight before.  I am trying to focus on working out to be strong and healthy rather than to lose weight.

It is frustrating.  I know I'm not being a good Health at Every Size advocate by admitting that I am trying to watch my food.  I really am not restricting myself much other than to not allow myself tons of chocolate at work.  And I am trying to make better choices but making food in the crockpot at home instead of picking up fast food or eating at a restaurant (or microwaving frozen crap).  I know I'm not the only one who struggles.  I see so many girls posting in my various groups saying they feel guilty for not wanting to be the weight they are.  And I don't think we should feel guilty.  I almost feel like some fat advocates do to other fatties exactly what they accuse thin people of doing -- making them feel bad about themselves.  And I'm about doing what makes me feel good, not feeling guilty.  So I am ridding myself of that guilt.

So yeah, if it needs to be said, I'm on a diet.  I'm watching the food that goes into my mouth because I certainly don't need to eat candy all day long.  I'm sure that will disappoint some people but it needs to be said.  I am about to make some really big life changes and I am excited for the future.  But I want my future to include less pain in my feet and I feel like the path that I am currently on will help me get there.
Posted by lolorashel at 11:00 AM

Email ThisBlogThis!Share to TwitterShare to FacebookShare to Pinterest
Labels: diet, exercise, health, health at every size, plus sized pole dancer