Congratulations, I Now Pronounce You Dead of Fat 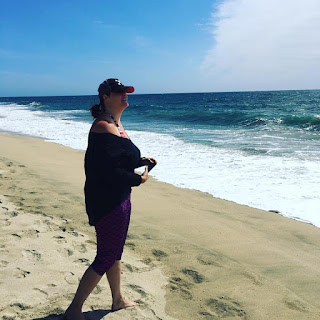 I had my annual appointment with my doctor yesterday.  As is now normal, 12 years post-gastric bypass, I had my blood work done.  For anyone who has been following me awhile, you may remember that my liver panels have been slightly off for years.  Earlier, this year, after working hard with Ellen, I brought those numbers down without significant weight loss.  What that tells me is that diet can heal my liver.

Last night, however, I learned that one of my enzymes had increased slightly since January.  So, the minute my doctor walked through the door, he started telling me that I needed to lose weight and wanted me to try diet pills.  I told him I would not be taking diet pills for any reason.  He told me that nonalcoholic fatty liver disease is more dangerous than they realized and I could expect that my life would be shortened.  I told him we are all dying, so I was okay with it.  We fought, loudly, for approximately 30 minutes (I am actually surprised his assistant didn't come in to check on us).  He would only repeat over and over that I needed to lose weight.  I would counter with all the arguments that pure calorie restriction doesn't work.  If it did, I would be skinny.  He asked me how many calories I eat per day -- I told him about 2,500 calories.  He told me it was WAY too many.  Clearly, I've maintained approximately the same weight for the past few years, so it must not be an extreme number of calories if his precious theory works.  I told him I had my resting metabolic rate tested and it was 1,800.  That means that by merely opening my eyes in the morning, I need a minimum of 1,800 calories just to live.  If I get up and start moving, then I need more.  I can burn 800-1,000 calories in a kickboxing session.  (For those of you concerned that I'm slipping back into disordered behaviors...I'm not...I don't count calories or care how much I burn during a workout session...I just know from years of disordered thinking about how much I eat and burn so I can bust numbers out to fucktard doctors who think they know everything.)

By the way, a few minutes later, my doctor did admit that my ultrasound has never ACTUALLY revealed that I have fatty liver.  I was tested for hepatitis, and those tests were negative.  So, he doesn't REALLY know why my liver panels are elevated, and then he admitted that many thin people have fatty liver.  So he can go fuck right off.

What is fatty liver and why is it scary?  For years, they thought that only alcoholics got cirrhosis.  Wrong.  Eating a lot of sugar (which is part of the Standard American Diet) causes fatty liver.  Fatty liver can cause cirrhosis or liver cancer, which can lead to liver failure.  The good news is that the liver is the most regenerative organ in our entire body.  It can be healed.

What I didn't tell my doctor was that I've been drinking a lot of alcohol lately and that is most likely the reason for the increase.  I used to drink once every few months, but for the last four months or so, I've probably been drinking once or twice a week.  However, if you start a conversation by screaming at your patient, they are most likely going to shut down and not have a productive discussion with you.  I am in the market for a new doctor.

So, here's the history of my numbers: 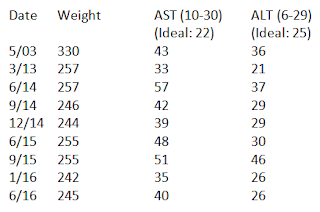 What are AST and ALT anyway?
Aspartate Aminotransferase (AST)
An aspartate aminotransferase (AST) test measures the amount of this enzyme in the blood. AST is normally found in red blood cells, liver, heart, muscle tissue, pancreas, and kidneys. AST formerly was called serum glutamic oxaloacetic transaminase (SGOT). Low levels of AST are normally found in the blood. When body tissue or an organ such as the heart or liver is diseased or damaged, additional AST is released into the bloodstream. The amount of AST in the blood is directly related to the extent of the tissue damage. After severe damage, AST levels rise in 6 to 10 hours and remain high for about 4 days.
Alanine Aminotransferase (ALT)
An alanine aminotransferase (ALT) test measures the amount of this enzyme in the blood. ALT is found mainly in the liver, but also in smaller amounts in the kidneys, heart, muscles, and pancreas. ALT was formerly called serum glutamic pyruvic transaminase (SGPT). ALT is measured to see if the liver is damaged or diseased. Low levels of ALT are normally found in the blood. But when the liver is damaged or diseased, it releases ALT into the bloodstream, which makes ALT levels go up. Most increases in ALT levels are caused by liver damage.
I get it, it is my doctor's job to keep me healthy.  I just feel like he isn't fully up to date on facts about health and weight.  Preaching pure calories-in versus calories-out seems irresponsible.  If dieting were ever that easy, we would all be textbook "ideal" weights.  Also, trying to shame people into losing weight has never worked and never will.  Again, if that were the case, we would all be skinny.  I've shown that I can lower my numbers without significant weight loss, so why not continue to allow me to do that?  I feel like he must be getting a kick back from the drug company.  I don't think him very literally yelling at me was just about my health.
I don't really know what to do.  This incident is triggering my disordered thinking pretty hard.  No, of course I don't want to die.  Yes, of course, my disordered brain still wants to lose 20 pounds.  However, I don't have the luxury of just waking up in the morning, restricting my calories and dropping weight.  When I lost the 20 pounds or so in 2008-2009, I was working out twice a day, watching my food intake, and still only lost one pound a month.  No, that wasn't a typo.  However, when I increased my fat intake, didn't count calories at all, and just ate healthy foods with Ellen about two years ago, I dropped 20 pounds fairly quickly.  My doctor doesn't believe in that witchcraft, however.  He acted like adding avocado to my protein shake was too many calories.  (All that fat!  The horror!!)
I will admit the sugar was slowly creeping back into my diet.  I am the keeper of the candy bowl in my office.  And I have decided to stop feeding anyone's addiction, including my own.  So, if I have seemed extra grumpy this week, that is why.  Sugar needs to come back out of my diet.  Not for weight loss reasons, but for health reasons.  If I accidentally lose 20 pounds again this year, I certainly won't complain though.
﻿
Posted by lolorashel at 10:38 AM