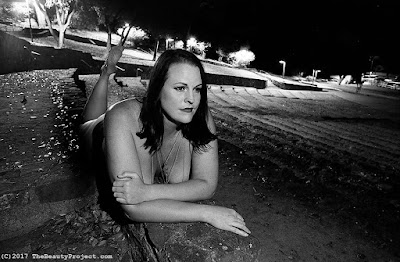 About seven years ago, I connected with a photographer named Steve Gatlin on Facebook.  He ran The Beauty Project, and contacted me about doing a nude or semi-nude/implied nudity photoshoot.  I would have been a little over six months into a new relationship and less than four months into being a Twirly Girl.  I can tell from the conversation on Facebook messenger that I was wary of what he was looking for.  I knew the pole industry was "fighting" the "stripper stigma" (which makes it sound like I'm against strippers, but I'm not).  It was probably also around the same time we had a really shitty experience with a few fire stations treating us really horribly, acting like we were hookers trying to swing naked around their poles (although one station was super awesome and now I have a life-long friend in Earl!).  I'm sure I was also concerned that my ex would be uncomfortable with me being naked around another dude and on the internet.

So what has happened in the last seven years?

Mostly?  I stopped giving a fuck.

I got out of the relationship that I never should have been in.  And I've become more comfortable in my own skin. 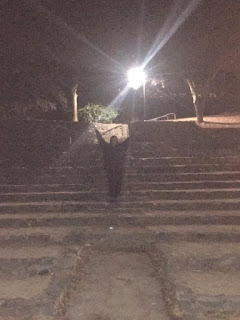 A year and a half ago, I wrote a blog about being naked (read that HERE).  I posted a photo wearing underwear and facing away from the camera, so you can't really see anything.  It spawned a conversation from some "concerned" do-gooder who felt compelled to basically tell me I must still care or I wouldn't feel compelled to post things like that at all (nudity is popular apparently...that blog had almost 1,400 views, when most of my blogs have 100-500 views).  I feel like being part of the body acceptance movement is part of my life purpose.  So, yeah, I do feel like posting photos and blogs that spark a conversation about the topic are important.  I certainly don't want to make my family uncomfortable, but I feel like for the general public, if you don't like what you see, move along.  Here's my new life mantra: mind your own fucking business.

Anyway, Steve popped back up recently and asked if I was ready to do a shoot and I said I was.  I recruited Marisa of Chunky Girl Comics to join me and off we went on our adventure to meet a complete stranger off the internet and take our clothes off in public.  What could possibly go wrong?

Our ominous sign came as we drove over the bridge and a spider appeared on the inside of my windshield.  I froze.  Marisa to the rescue as she found a tissue and squished the spider -- thereby saving both of our lives.  Not all heroes wear capes! 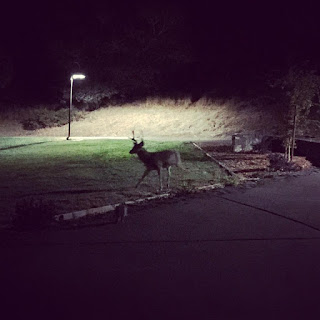 We met Steve at a sports bar just to break the ice.  Steve is an extremely easy guy to get along with.  He is ridiculously tall, which could have been intimidating.  But he quickly put us at ease -- and was a complete teddy bear.  The shoots are always at night.  We planned to shoot at a beach by San Quentin federal prison with the Richmond-San Rafael Bridge in the background.  It was freezing outside.  I quickly forgot my concern about getting naked in public and mostly worried my nipples would freeze off during the shoot.  We drove down to the beach and started getting set up.  I really thought that I would be shy about dropping my sweatshirt in front of a stranger when it came time to shoot, but it really wasn't that difficult.  Steve would set up the shot, we'd drop our cover, take one 7 second exposure (he shoots with real film) and a second 10 second exposure.  Then we'd cover up.  We were naked for maybe 30 seconds.  As we set up my very first shot, I saw a woman walking by above us on the cliff/sidewalk.  She was very clearly being nosy and trying to figure out what we were doing, so I waited until she passed before I dropped my sweatshirt.  I did a couple shots.  Marisa did a couple of shots.  Then Steve ran up to the car to get something.

Marisa and I were waiting on the beach with our covers on when we suddenly noticed two flashlights.  We saw a police officer walking along the cliff toward the stairs that would lead to us.  Oh shit.

"Officer Mike" (names are changed to protect the innocent) came down to ask what we were doing.  We explained The Beauty Project (celebrating all kinds of body types).  He explained that someone complained that people were shooting photos naked on the beach (dumb bitch...mind your own business).  He asked if we were naked.  We admitted we were (under our sweatshirts).  (Side note: First off, it was after 9 PM down on a dark beach.  No kids would be wandering by.  Second off, you had to work pretty hard to see us.  So we were hardly walking naked down the middle of the street in a neighborhood.)  He asked if we were there of our own free will.  Yes we were.  And, once it was clear we were there willingly, and clearly not shooting porn, he joked with us a bit (wanted to know when he could do his own shoot).  He said we couldn't be naked on the beach, and he was so cool about it that we couldn't disrespect him, so we packed up and changed locations.  He, however, unwittingly provided us with entertainment for the rest of the evening. 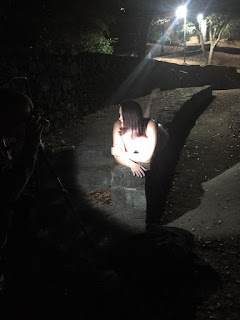 We moved to a park in an former Air Force Base after the beach (the first photo above was shot there).  While we are on that subject, you're probably asking: hey why is there only one  finished photo shown on this blog?  Well, last time I posted a blog with implied nudity, someone must have reported it and blogspot got mad at me.  I'm trying to avoid having this post removed.  If you want to find the photos of me, Marisa or other participants, please visit the Facebook page HERE.

Sorry.  Back to covert location number 2.  We were in this amphitheater surrounded by trees.  It was a really cool (no pun intended) park -- beautiful, but even colder than the beach.  There were some kids or crackheads arguing in a car in the parking lot, which provided us with some entertainment (plus, it seemed a little naughty that they could look up in the trees and see us running around nude at any moment).  While we were shooting, deer kept stepping on sticks amongst the trees, then coming out to eat grass.  Any time we heard a noise, we thought it must be Officer Mike's drone coming to check on us.  I guess you had to be there, but it was pretty hilarious at the time.  (In addition to The Beauty Project, we got to be part of two other projects for Steve, and I am really excited for him to announce those in the near future.)  We shot until damn near midnight, then we headed home.  Marisa and I really enjoyed the experience and thank Steve for his time and patience with our silly asses.

So, despite my concerns about being naked, this entire experience was really fantastic.  (I am also strangely proud that I was part of the cops being called only the third time in 16 years of Steve shooting photos for this project.)  I do have to say that seeing my photos go live on Instagram and Facebook was a lot more stressful than taking the photos.  I guess I still don't want to upset my family, and I'd hate for my co-workers to see me nude (I mean, as far as they know, I'm a middle aged chick who barely wears make-up and wears frumpy clothes....I don't even think they know I have boobs).  But for the most part, I am extremely proud of the photos and suggest anyone interested contact Steve for their own photoshoot!
Posted by lolorashel at 8:00 AM