I am one year into being gluten-free for the purpose of healing my psoriasis.  My last Stelara (immuno-suppressant) shot was in July 2017.  My skin stayed fairly clear, even through the stress of my complete melt down last August.  That's pretty good.  No.  That's fucking amazing!

Autoimmune diseases are a funny thing.  They are these mystery diseases where no one really knows why your body is doing what it's doing.  The over-simplified explanation of psoriasis:  On the inside, your immune system is over-active and basically starts attacking you.  On the outside, skin cells in certain areas replenish every three days instead of every 30 causing ugly plaques/dry skin.  Stress is usually the trigger for a flare up. 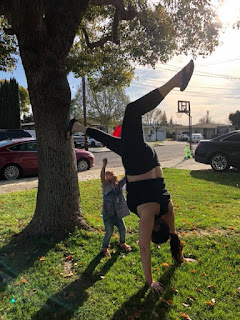 I made it into 2018 before my skin started showing signs of a flare up (over six months medication-free).  I can't really put my finger on a trigger.  Perhaps more gluten sneaking into my diet for the holidays.  Maybe some stress.  Who knows.  Regardless, it was a minor flare up.  I treated it occasionally with a topical medication and it stayed fairly mild, although it didn't go away.  I started being more careful with my diet, but I still had some patches.

Then, I remembered the blog I wrote about psoriasis and its metaphysical explanation.  When I Googled it again recently, I just looked at the general theme (and not the specifics I mentioned in my blog).  Fear.  But fear of what?  What did I fear when I was a kid?  My parents splitting up -- sure.  But we had differing opinions on when my psoriasis started.  My parents insisted it was when I was anywhere from 10-12 years old, and I thought I was closer to five years old.  Then about three weeks ago, I found a journal entry from when I was 11 or 12 years old.  I mentioned how I had suffered from psoriasis for seven years.  Boom.  I WAS five years old when I was diagnosed.  I still remember sitting in the doctor's office and he asked me if I ever picked at the plaques.  I admitted I did.  He laughed and said I shouldn't be so honest.

So what happened to trigger psoriasis when I was four or five years old?  My first memory as a child:


I was in my neighbor’s backyard catching ladybugs (now a symbol of joy and peace for me) and, as I turned to leave (I remember reaching for the door knob), a visiting dog attacked me from behind.  He sunk his teeth into the back of my head, dragging me around the yard, and trying to shake me to break my neck.  A little girl in the yard with me apparently kicked the dog until he let go and I walked screaming through the house, then the neighbor’s front yard toward our shared fence.  I remember walking into our yard, bleeding, and I saw my mom run towards me, then fall to her knees.  I’ve always thought I was around three years old.  I asked my mom three weeks ago what she remembered.  She confirmed falling to her knees.  She couldn't remember if she was six months pregnant with my brother (which would have made it sometime in December) or if it was when my brother was six months old (which would have been around August or September).  I don’t remember her having a belly, and I remember the shirt I was wearing.  It was a short sleeved 70’s style striped shirt.  I wasn’t wearing a jacket.  So I am leaning toward the August/September time frame.  Also, I have a vague recollection of the stitches in my head coming out around my birthday, which is August 31.  So that means I would have been closer to four years old.  And that means the psoriasis presented itself within a year.  I have never been afraid of dogs, but apparently I bottled that fear up inside anyway.  But that’s my first life memory.  Being bitten by a dog and my mom running toward me and falling to her knees.  And that bottled up fear potentially triggered an autoimmune disease, which I have battled for nearly 40 years.
Psoriasis sucks.  I realize its really just an inconvenience and slightly embarrassing.  Ugly skin (explaining to people they won't catch it).  Can be a pain when you're a pole dancer because you can't use your regular lotions.  Realistically, it is pointing at some inflammation on the inside, but of all the immune system issues to have, it's a pretty benign one.  But I still hate it.
About a month ago, I listened to a podcast about EFT (emotional freedom technique) tapping (HERE is the site I like best).  What is that?
"EFT is a form of psychological acupressure that uses a gentle tapping technique instead of needles to stimulate traditional Chinese acupuncture points. The tapping on the designated points on the face and body is combined with verbalizing the identified problem followed by a general affirmation phrase."
So I wrote a tapping script -- a long one.  Acknowledging, then releasing my fears, as well as many other issues.  Guess what?  My psoriasis cleared in a week.  It is the first time I have healed a flare up without medication in my entire life.  No, that is not an exaggeration.  Although I am certain being gluten-free has helped keep my skin clearer for much longer than it ever has before, this was the first time I actually HEALED myself.  (Another benefit to going gluten-free and healing my gut issues:  I haven't taken a single allergy pill in a year.)
I'm pretty stoked about it, and its just another reminder of how powerful our minds and bodies are, if we will just get out of their way.
Posted by lolorashel at 2:46 PM