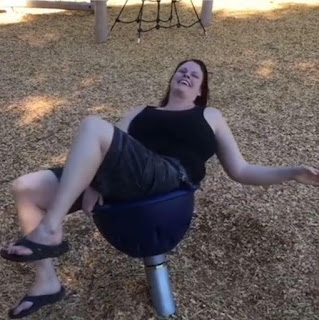 I was diagnosed with psoriasis when I was around 12 years old.  I remember being given a list of foods I shouldn't eat -- essentially it was anything gluten or sugar filled.  Anything delicious.  I don't really remember my diet changing at that point.  I wasn't really in charge of what I was eating.

Even though auto-immune diseases affect you on the inside, really -- with psoriasis -- it's the outside that usually bothers us the most.  The dry skin everywhere is embarrassing (and can be painful, especially when the weather is super dry and it cracks).  Seeing my red arms in the mirror during Tahitian dance class would always make me feel self-conscious.  The greasy medications leaving trails everywhere make me crazy.  On pole days, I'd have to choose between using lotions and medications (which means I won't stick to the pole) or having a good pole (but bad skin) day.

I initially played around with the idea of going gluten-free in 2011.  I remember trying out a gluten-free pizza and it completely hurting my stomach (probably related to the gastric bypass).  I don't think I actually tried very hard and would certainly not say I really tried going gluten-free.

Ellen strongly suggested I go gluten-free when we started working together in 2014.  I wasn't ready.  I promised to just eat less bread (while I was limiting sugar), but I just couldn't be on a "diet" (although I guess cutting sugar was being on a diet...whatever...let's change one thing at a time here...I'm change-resistant).

My psoriasis has been flaring up lately and I recently decided to get back on Stelara (check out that link for "before photos").  Ellen was disappointed that I didn't come to her to talk about potential diet changes before getting back on medication but I was desperate.  However, she did finally talk me into going gluten-free.  I have officially been gluten-free for a whole week and a half, and no one has died, including me!  (I recognize I won't know if it's the Stelara or the diet fixing my skin, but I don't care...I lost three pounds and did notice that my eyelids are suddenly less swollen so I'm going to guess the inflammation is already going down.)

I rarely just buy bread to keep at my house, so that isn't difficult.  It's really what happens when I go out.  For example, when I had a doctor's appointment in San Jose (an hour plus away from my house...more like 2-plus hours when in traffic), I decided to get dinner before heading home.  I used an app on my phone to find a gluten-free pizza place with good reviews.  The pizza was delicious, although it did upset my stomach a little.  I am trying to avoid changing my diet to a "gluten-free processed food filled" diet.  So, really, I'm trying to just be better at what I tried a few years ago -- just eating less food filled with gluten.  However, I won't lie...I get easily overwhelmed when it comes to food so I have picked up some gluten-free raviolis for dinner this week.

Gluten seems to be tucked away in so many places.  Soy sauce (a lot of sauces and salad dressings, actually).  Licorice.  Shredded cheese (rolled in flour so it won't stick to the bag).  Some chocolates.  Black Angus uses wheat butter on their steaks.  Going gluten-free isn't just about not eating bread or products containing wheat.  It's checking every label (I'm using a scanner app that will tell me if the foods in the grocery store have gluten in them).  It's knowing all the weird foods that may have something hiding in them.  It's not eating french fries at places that also fry their breaded chicken in the same fryer.

Ellen recently put out a newsletter about gluten:

"The reality is, gluten is unsafe for 100% of humans, 100% of the time. Our digestive systems lack the enzymes necessary to break down the protein structures, which means these large undigested proteins make their way through our systems. As they do, the inflammation created irritates the walls of the small intestine, creating something called intestinal permeability, aka leaky gut."

You can read the rest of that newsletter HERE.

A recent article mentioned a study linking gluten-free diets and Type II diabetes.  You can read that article HERE.  It is unfortunate that they don't mention that the most likely cause of the increase in diabetes would be that gluten-free processed food diet.  When food companies remove things like fat or gluten, they generally replace it with sugar so it will still taste good.  I remember when Weight Watchers did their fat and fiber program, they required you to eat fewer than 10 grams of fat and more than 10 grams of fiber.  What people did was eat a ton of processed "fat-free" sugar-filled food.  I understand it was a disaster and seems to have been a precursor to their points system that now takes calories into consideration.

As with cutting sugar a few years ago, this has been fairly easy.  I think because Ellen has once again let me come to my own conclusion that I would feel better if I tried this rather than trying to force it on me.  I am trying not to be "that girl" when I'm out at restaurants.  I don't want to ask a bunch of questions about what is in every menu item.  I'm using my app to do a little research before I go and then I'm just making better choices about the food I eat.  As it comes down to...always...just eat more real food!
Posted by lolorashel at 8:00 AM 1 comment: Links to this post