The History of Pole Dancing

I was talking to a friend recently about the history of dancing on a vertical pole.  Strangely, I have never researched this before.  So I thought I'd post some links from other websites claiming to know the down and dirty history of pole dancing.

The history of pole dancing can be traced back over two thousand years to dances that were performed by women for women and to an Indian sport called Mallakhamb, Chinese Pole, and also side shows in traveling circus’ and more recently “Gentleman’s Clubs”. Sheila Kelley, in her book ”The S Factor,” writes, “Though the exact date is not known, it is well documented that rolling, undulating hip movements were not originally intended as titillation for men but rather as expressions of the female body’s power to promote fertility in the land. In ancient matriarchal cultures, dance was performed by women and for women exclusively.” Mallakhamb, as well as Chinese Pole, is predominantly a male sport. Though they’re used in similar ways, a Mallakhamb and a Chinese pole is quite different from the western pole. The Mallakhamb pole is made of wood, is larger in diameter, and has a wooden ball on the top of it.  Chinese Pole is usually performed on two poles. The men will hop from pole to pole and perform many gravity defying tricks. Chinese poles are approximately twenty feet high. The history of pole dancing in the West is very different from that of India’s Mallakhamb. Western Pole dancing originated in the nineteen-twenties at the height of the American depression. Traveling fairs would go from town to town entertaining the crowds. As part of the fair there would be many different types of side shows in small tents surrounding the main tent. In one of the side tents, girls would dance suggestively on a small stage in front of crowds of cheering men. The tent pole became known, as the “dance pole,” which still exists today. Pole dancing gradually began evolving from tents to bars as burlesque became more acceptable in nineteen-fifties. Then in the nineteen-eighties pole dancing and striptease became popular in Canada and then in the United States. In the nineteen-nineties, Fawnia Mondey Dietrich, took the art of pole dancing and began teaching it to the everyday woman. She produced the first instructional pole fitness and dance DVD.

Early stories tell of African tribal rituals in which betrothed women would dance provocatively around a wooden phallus. The dance was designed to show their future husbands how they wanted to be made love to.

Another example of ancient pole dancing is the Maypole dance, which dates back to the 12th century. Originally a pagan celebration of fertility, the Maypole is also a phallic symbol. Brace yourselves now, but Maypole festivals typically included an orgiastic feast at which lovers were encouraged to make love in public! The Maypole tradition lives on, but the public sex bit is usually omitted. When the Victorians got there [sic] hands on it, they transformed it into something a little tamer.

There are some that are of the opinion that the rather chaste Victorians re-branded the historic May pole as something of innocence as previously it had been a pagan fertility dance dating back to the 12th century. The origins of Mallakhamb (man of power or gymnasts pole) which is yoga practiced on a wooden pole and on rope (practiced in India), may date back to 12th century but the discipline is suspected to be formed as recently as 250 years ago. Another closely related discipline is Mallastambha (gymnasts pillar).  This "pole dance" practiced by wrestlers incorporates the use of an iron pole to build up strength. Mallastambha is really no longer practiced. Today pole Mallakhamb is practiced by men and boys and rope Mallakamb (Indian rope tricks) is practiced by women and girls.

The first recorded striptease dates back to a myth from ancient Sumerian times involving Inanna, the Goddess of Love, and her descent into the underworld to find her lover Damouz. At each of the seven gates, she removed an article of clothing or a piece of jewellery. As long as Inanna remained in hell, the earth was barren. When she returned, the earth again became abundant and fruitful. Some believe this myth evolved in the 'Dance of the Seven Veils' of Salome from the bible.

The bible records Salome's dance but the first mention of removing veils rises from Oscar Wilde's play of 'Salome' in 1883. Some have claimed this to be the origin of modern striptease, but other influences may have come from Parisian times and the Moulin Rouge striptease through to Middle Eastern belly dancing and American burlesque. 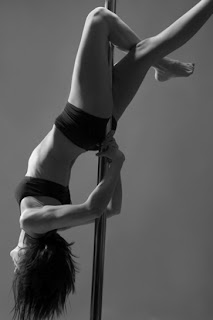 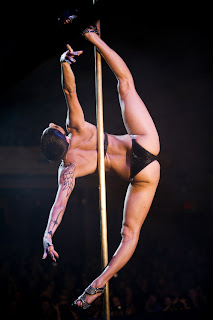 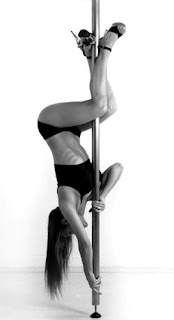 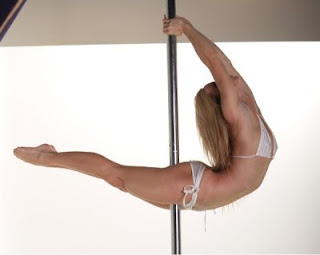 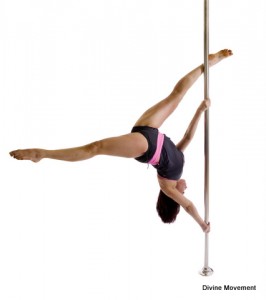 And part 3 posted in November 2013: http://lolorashel.blogspot.com/2013/11/the-history-of-pole-dance-part-three.html