This is a post that has been a year in the making.  I was so angry about it for a long time that I just kind of let the topic sit in the back of my brain.  Until today.  I'm sure I have mentioned it in passing in other posts but I haven't addressed it directly.  Now I'm making it sound way more exciting than it is probably going to end up being.  Oh well, drama queen...that's what they call me.

Last year, Bel was doing little challenges at Twirly Girls.  We would wear our shirts around town and take pictures at different places.  One suggestion was to find poles at fire stations.  I started researching fire stations that actually had poles (they aren't very common in California) and fired off e-mails to try to set up appointments.  It never once occurred to me not to mention that we were pole fitness students coming in our Twirly Girls shirts to take photos with them.  They all had a policy of allowing the public in to see the facilities -- hello, our tax dollars pay their salaries.

I was denied by every single station.  Some were kinder in their wording than others.  A few were outright rude and said it would be inappropriate to have anyone from our studio come take photos near their pole.

Part of me was FURIOUS.  If I had just requested a tour, and had shown up in my TG shirt and jeans to take photos, they never would have known and I would have gotten my photos.

Part of me was sad.  The stripper stigma strikes again.

A friend had a hook-up at a fire station.  Said station will remain nameless to protect the innocent.  But they allowed us to come in, put on their gear and take all kinds of photos.  We never got naked.  We didn't do any "stripper moves" off their trucks.  But we did have a fun day and met some awesome people.  And, for that, I thank them. 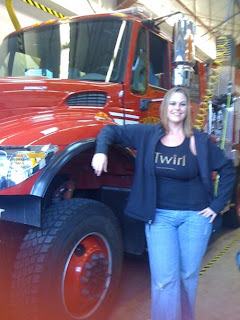 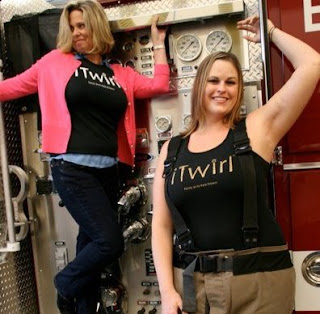