September Twirly Girl of the Month!

Bel had mentioned this TG of the Month idea before, and since I'm on a roll with our studio spotlights, I thought I would start doing it now!  We chose our first Twirly Girl of the Month to be FARRAH!  She just went off to school and we miss her a lot.  Here's Farrah's story!

How did you find Twirly Girls?
I was scouring Yelp for all the pole studios in the bay area, and in so doing, I found your blog and really liked everything that I read. [I owe you a ginormous thank you for your writing! :] It just seemed like such a great place to be, and I'd been wanting to learn for many, many moons, so I couldn't not check it out!

How long have you been a Twirly Girl?
I took my first taster class in December of 2010 (as my hooray-you-made-it-out-of-finals-alive treat to myself). I fell in love, but I couldn't start taking classes right away because I was supposed to be studying for MCATs, so I officially started in February 2011, a couple days after I took the test. I was basically a fixture at the studio for the entire summer and I really, really miss it there. I'm going through some serious withdrawal over here. :[

Did you pole dance before becoming a TG?
Nope, although I'd wanted to learn ever since I found out about its existence 4 years ago while I was in Hong Kong. It looked like vertical gymnastics, and I was in awe of the tricks and the spins that people could do. While I was in college, I kept my life so freakishly busy, I never truly had free time until I graduated. I also didn't even get my license until last October, so the fact that I would've had to transport myself on foot/bike to whichever studio I chose was also working against me.

Which class(es) do you take?  Who is your instructor?
I started out coming to one of Bel's classes just once a week on Tuesdays, but once my classes in school ended, I decided to do unlimited in June/July/August so I also got to start taking classes with Shelly Lamb. It honestly wouldn't be far from the truth to say that the studio was like my second home during the summer--I'd even bring my books/notes so I could study in between classes. Pole dancing is super addicting, and the feeling you get from finally nailing something you've been working on is exhilarating. I wanted to learn everything I possibly could before I had to run off to the other end of the country, and I'm so thankful that I met Bel and Shelly and that I had the opportunity to learn from them. I cannot describe in words how awesome they both are, but I tried my best to articulate this in my Yelp reviews: 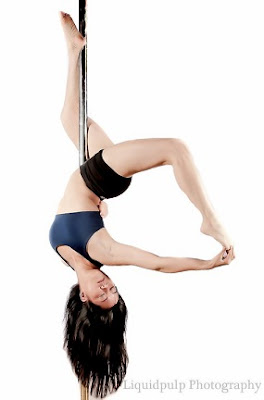 Which move were you most excited to nail?
This is a difficult one, because I was pretty ecstatic over practically every move that I nailed, but I think...either what everyone at the studio has been calling, the "Falling Farrah," because it's the first move I ever successfully taught someone else (:D!), or the Bobblebutt! (I don't know if that has a "real" name, but I saw it from Alethea's(?) video and had to try it.)

Have you taken any workshops?  Which was your favorite?
I've taken one workshop (made possible from the Twirly Girls scholarship fund; I can't thank everyone enough!) with Pantera Blacksmith in August. She's an amazing instructor--super strong, very fun, and I love her spunk!

Do you like to dance in heels or barefoot?
I definitely tend to default to barefoot. I try on heels every now and then just to change things up, but I'm terrible at walking in them and I'm also a major klutz, so it just seems like an accident waiting to happen. But! I have to admit, I love how long they make my legs look. Oh, the powers of illusion.

What is your favorite song to dance to (at this moment)?
I'm still completely in love with Emerson Hart's "I Wish the Best For You" right now. In general, I tend to gravitate towards the slower songs.

What is your guilty pleasure?
I'm a strong believer in the no-guilt rule (as long as everything is done in moderation). However, if I had to choose one thing, food would win, hands down. "Black hole" is one of my nicknames because I consume frightening amounts of food. When I go on cruise ships, I tend to scare the waiters because I order something like 3 appetizers, 3 main dishes and 3 desserts and eat it all. I realize this seems to blow the whole "everything in moderation" thing out the window, so I will also mention that this doesn't happen every single day and I also happen to love all sorts of exercise and physical activity (otherwise, I'd be a complete disgrace as an exercise biology major!).

I'm definitely excited that Farrah found Twirly Girls through my blog!  And you should read her Yelp review...she made us all cry -- it is so sweet!  Farrah is now on the other side of the country, going to school to be a doctor!  We wish her the best and can't wait for Winter break so we can see her again.  She is also writing a blog about her adventures on the East Coast.  Check out the Twirly Girls group on Facebook for updates!
Posted by lolorashel at 11:50 AM