Men on the Pole: Meet Joel!

Joel was probably the first non-pro "man on the pole" that I saw hanging around YouTube and Facebook.  Here is his story!

"Men on the Pole" has become a popular subject.  How did you get interested in pole dancing/aerial arts?

Like so many others, I fell in love with pole dance on You-Tube. After many months of commenting on others routines, I uploaded a skit to You-Tube in which I joked about building a pole in the basement. I think I knew all along that I was going to build that pole for real. It was a genuine case of "life imitating art"--the skit became reality. That video is still up on my channel: Poledancefan's Wife Lays Down the Law.


What is your fitness background?

My first love has always been bike riding. I don't like cold weather riding, but from the months April to October, I ride almost every day. I have a few standard rides, including from my house to the Navy Pier Beer Garden for live music (34 miles roundtrip), the Prairie Path system, the Brookfield Zoo/Salt Creek Trail (25 miles roundtrip). I go to the the local LA Fitness for treadmilling and weight machines. At home I have a real mish-mash of rubber bands, therapy bands, a pull-up bar, and hand squeezers. I really like the Fitness Model "Zuzanna" of Charley James Fitness Channel and I sometimes follow along with her videos. Much of her material can be done on the floor or a mat with no equipment. My favorite floor exercise in the slow, twisty sit up. Just lie down completely stretched out, hands over head. Then sit-up slowly, hands still extended and bring your straight arms over to your left side on the ground. Then repeat, going to the OTHER side. It seems like a joke until you get to number 30! Don't weight down your feet--you see, the idea is to sit up S L O W L Y so your feet don't jerk up into the air. It forces you to avoid "momentum" and build core.

What aerial arts do you participate in besides pole dance?

I should say that Aerial is my ONLY activity now, because I lost my pole practice area to my son's return from college. Chicago still has no regularly offered pole classes for men. It's been a real source of frustration for me. Aerial classes, however, are co-ed and it's the ONLY outlet for me right now until some pole studio decides to allow men in class on a regular basis. 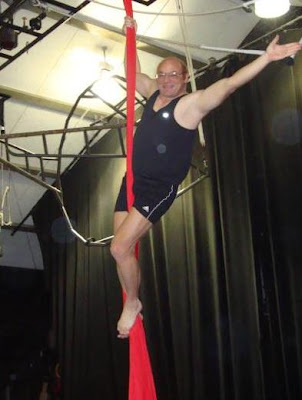 I take beginner's Aerial at the Actor's Gymnasium in Evanston, Illinois. That's right by Northwestern University. My instructor, Jill Heyser, is wonderful. She's an engineer, amateur astronomer, and talented theatre and performing artist. We work on trapeze, Spanish Web (which is a rope made of fire hose and stuffed with a soft fill and rigged with a leather loop and hand/foot harness for twirling), Lyra (aerial hoop), and the Silks (knotted or open).

It's been a real struggle for me. I am the only male in the class, the oldest, the least flexible, and the heaviest. But I have enjoyed every minute of it--including the chance to overcome my fears and my self doubt. At this point in my life--and given some of the distractions I have going on right now--I know that I probably won't excel in these things, but I have made a progress each session.

The best part of Aerial has been making new friends. One of my classmates, Amy, recognized me from a pole jam several years ago and was instrumental in encouraging me to keep returning to class when I got very discouraged.  A few of us have lunch every Saturday after class, so there is a real social component to it also.

What is your fitness routine (on and off the pole/silks/lyra, etc.)?

Most days I go to the Health Club. But when I am busy at home, I have all of these little tricks to stay active. One day I took 50 pennies out of the penny jar, threw them down the basement stairs , and resolved to get each one back in the jar within 24 hours, one at a time. My chores and laundry got about 25 of them back up the stairs, but later that night I was sprinting up the stairs, one penny at a time!!! One day I stole (my wife) Laurie's egg timer and kept setting it to 30 minute intervals and did a floor exercise every time it beeped! A few days later she called me at work because she was baking a cake and couldn't find her timer!!!!

I eat mostly chicken and turkey for meat. I don't eat pork or shellfish at all--I gave them up in memory of Bob Marley's death in 1981. It's a long story-- I was a big fan! I do like beef and steak--I certainly won't turn down a hamburger or a steak on the grill if Laurie offers to cook them. But I avoid red meat during the week. My most common lunch meal is the Chicken Ceaser Salad or some variation at Panera's Deli. I would describe my wife as a typical all American cook, which means we are as likely to be eating Taco's as Curry Chicken, Spaghetti, or Pot Roast for dinner.

How do you describe your pole/aerial style?

"Beginner."  I don't really dance, so I practice it more as a sport or an athletic activity.

Have you participated in any competitions?  Do you have any title(s)? 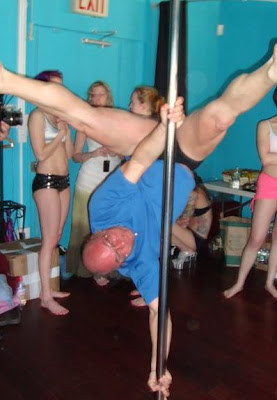 Right now, my basement pole room is "in flux." My son is finishing his college studies at home, so he lives down there next to the workout room. We have an "uneasy truce" and share that space for right now, so the pole is a bit lonely!

Do you have sponsors you'd like to acknowledge?  (If applicable.)

I guess right now, my aerial inspiration has been my friend Amy. I had a real "crisis of pole" when I saw that circumstances in my life would make continuing to pole dance impossible for the time-being. When I first came to aerial class, I decided 15 minutes into class I was never coming back. It was too difficult! Well, she had a different idea about that and somehow talked me into sticking to it.  I am very grateful to her for the faith she had in me.

What did you do before competing and/or opening your pole studio?  (If applicable.)

I am still working as a nursing home inspector for the State of Illinois. It's a field job, I'm out in my car every day and not tied to a desk. I do everything from reviewing medical charts to chasing bed-bugs into a zip lock bag--there's never a dull moment! It's not glamorous or high paying, but it's a steady gig with a pension and lots of people contact. The elderly population is great to work with and I enjoy the time I spend at work with them.

I do think it would be fun to open a mixed apparatus aerial studio one day. I would love to see a studio appeal to men by adding the rock climbing and rappelling elements to aerial and to pole. We could get men into studios if there were multi-disciplinary elements in the class. In fact, I think it would be awesome for a Marine or a Special Forces soldier to come to a studio with some gear and teach some rope climbing skills as an adjunct to what we do. I hope someone steals this idea--seriously!!

What is your favorite song to dance to (at this moment)?

I am a big Reggae fan and I just play stuff in the background. I can't say I really dance. I am very open minded when it comes to music----and now that I hang out with so many aerialists from Wisconsin who come to class here, I have even listened to a little bit of Industrial music! 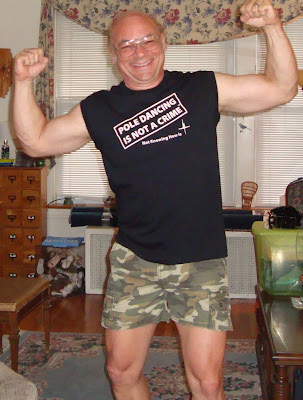 Do you have any other upcoming events/competitions you'd like people to know about?

YES! I want to put in a word for Meagan Evanoff's and Diana Sekura's production Company "Ascend Pole Productions" which is planning a January Showcase in Chicago. And also, Crystal Harris and her Michigan Pole Dance Organization, which is planning a Spring showcase the weekend of March 24th in 2012 in Detroit, Michigan.  I will be at both events..and....well, I have enough information about two of the acts that are going to be at each event to tell you NOT TO MISS IT!!

What else would you like people to know about you and/or your studio?

The pole community has changed my life for the better. I relish the social contacts it has brought, the pure beauty of this form of dance, the wonderfully off-beat nature of its adherents and fans. I've always been a bit off the beaten path and with pole I feel like I have come home!
Posted by lolorashel at 1:49 PM