Ginger and I have been dancing together for awhile now.  Probably going on two years.  She has been a fan of Liquid Motion so often she incorporates that into our routines, but I had never taken any formal classes.  I remember being at Pole Convention in 2012 when the ladies of Liquid Motion performed (Jeni Janover Stephanie Skyy, Danielle Mayzes and Danielle Romano).  It was mesmerizing.  Bodies moving so fluidly, crossing paths without effort.  They would come together and move apart and sometimes you didn't know where one person started and the other ended.  It was sexy in a very sensual but non-stripper way (not that there's anything with dancing in the "stripper way").  I don't know how to explain it.  It was just different.  You can view that video HERE.

Anyway, Ginger said Liquid Motion was coming to town, so away we went!  Ginger did FOUR workshops on Saturday.  FOUR.  And they were each 90-120 minutes long.  She's a badass.  I did my regular class with Ellen in the morning, then came out just for the doubles workshop, which did last two hours.  I went straight to a massage (which was actually kind of brutal).  I could barely move the next day.

I think the assumption was that most people came with a partner or at least had someone there they knew well enough to bump and grind on and slither around on the ground with (there was one hetero couple who were super sexy to watch).  So, of course, the whole reason I was there was to dance with Ginger.  But before we even got started, there was a mention of switching partners.  We could opt out...but I didn't want to be the sissy baby.  So I said, OF COURSE I will dance with other partners!  Then I cried a little on the inside.

Now, part of why I love dancing with Ginger is because she doesn't judge me.  She doesn't judge my fat.  Or my ridiculous sweat (of which there is always a ton).  She doesn't care that I can't dance that well.  Ginger just accepts me.  And not many people do that.  So, for me to say, of course I'm cool switching partners, is also me forcing myself further outside of my comfort zone.  And that is why I'm there, right?

So, we begin class together.  Ginger and I.  We warm up.  We do some log rolls.  But the time comes when we are supposed to switch.  I see people pairing up.  And I'm like the kid at the playground who doesn't want to get picked last.  It was a really unnecessary vulnerable moment for me.  I see Brie sitting against the wall.  Brie isn't stressed about finding a partner.  I have always liked Brie.  She has always been nice to me and she exudes confidence.  I respect that.  So I crawled up...will you be my partner?  Brie says yes!  Score!  But here's where the fear sets in.  Will she be disgusted by my sweaty body?  We are rolling all over the floor together.  But she didn't miss a beat.  If it did bug her, she kindly didn't let it show.  She's closer to my height, and also has ginormous boobs like mine, so it was a good match.  Later, I got brave again and switched to April.  Again, slightly closer to my height with boobs.  And so I got to fly in some moves that I could have only based before.  For the record, April is as freaking strong as an ox.  I kept worrying that I was going to squish her but she never failed me.  I have to admit, I did drop us once.  My chaturanga was not strong!

Anyway, I won't give away the secrets of Liquid Motion but I really did enjoy the class.  It was humbling realizing that, even when I feel silly, I can't let go because I'll let my partner down.  This was not just about me.  It was a great feeling to try dancing with new people but I still prefer dancing with Ginger.  We did some breathing and moving in the beginning.  We were asked to really pay attention to who was leading and make sure we both took turns.  There were a few times when it was clear that one of us initiated a move, but I felt like a good portion of that exercise, I absolutely could not tell who was leading.  I think we just are that in tune now.

Danielle was a great instructor.  She had a clear curriculum and was open to suggestions as some of us with different body types talked about how to make certain moves work for us (until we realized we were shoulder rolling the wrong way, Brie and I ate a lot of boob).  I'm always concerned that a thinner instructor won't understand how my larger body works.  But I never felt judged, she was always helpful with suggestions, and was open to listening to us talk about how to make moves work.
I want to thank Sandra and Kitty Kats Korner for opening their home to me once again, and thank you to Danielle for traveling to this coast to teach us how to be liquid!  Thank you Jeanette for taking photos!  And THANK YOU to Ginger for being you.  If you've ever been curious about taking a Liquid Motion workshop, I absolutely recommend it.  They can accommodate all levels.  And, especially if you are shy and feel awkward being sexy, you should make yourself take one of these workshops!

Cowboy's Wild Adventures - a pole show and a bike ride

So, Robert is doing it again...he's going to ride 545 miles over 7 days to raise money for AIDS LifeCycle.  We came together last weekend to do a pole fundraiser at Club 1220.  It was so much fun!  Check out everyone's videos below.  I am highlighting mine, as Ellen helped me put it together, and despite not turning around in time so everyone could see my underwear properly, it is my absolute favorite routine to date.

If you would like to donate to the cause, please visit: 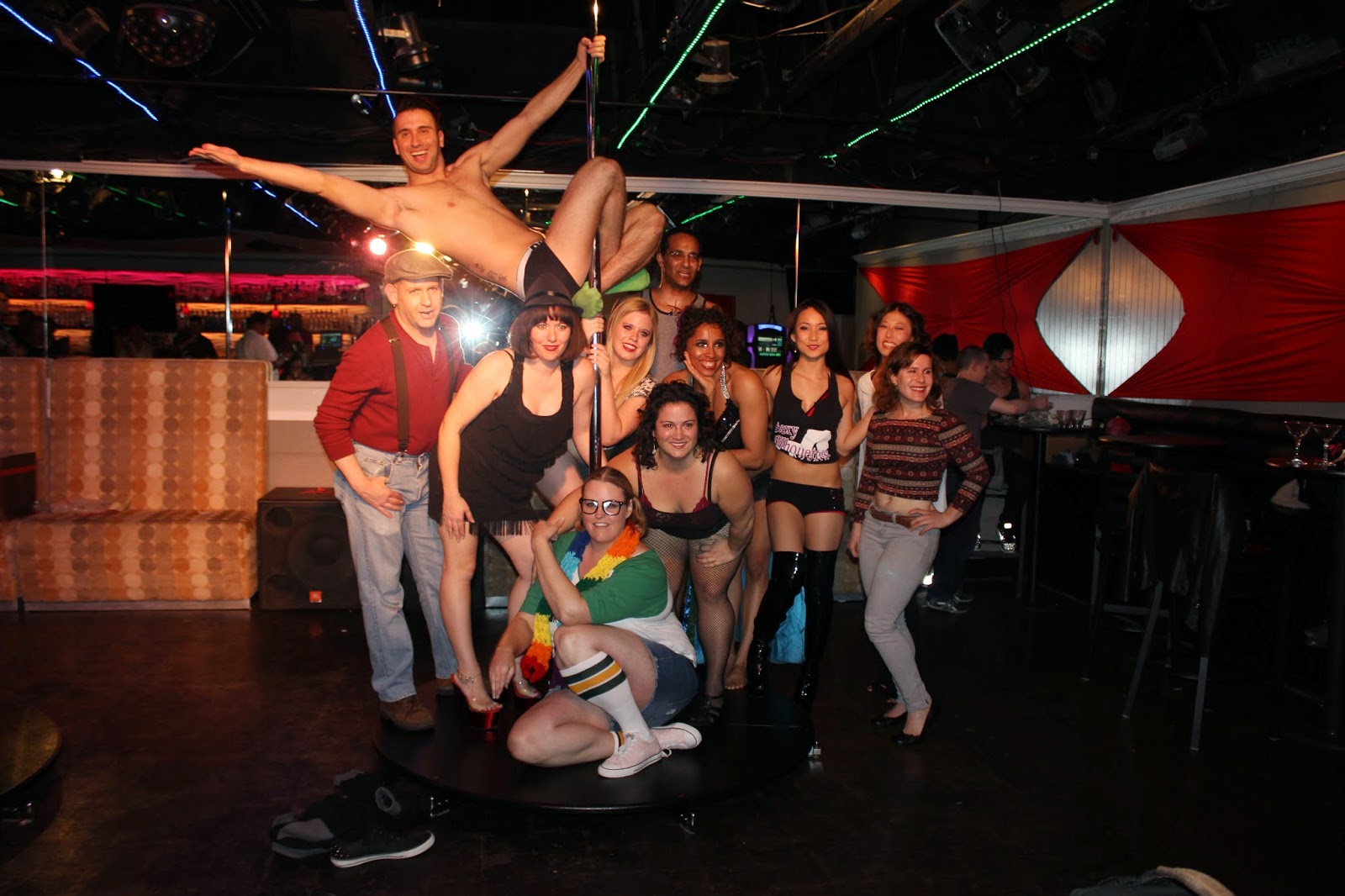 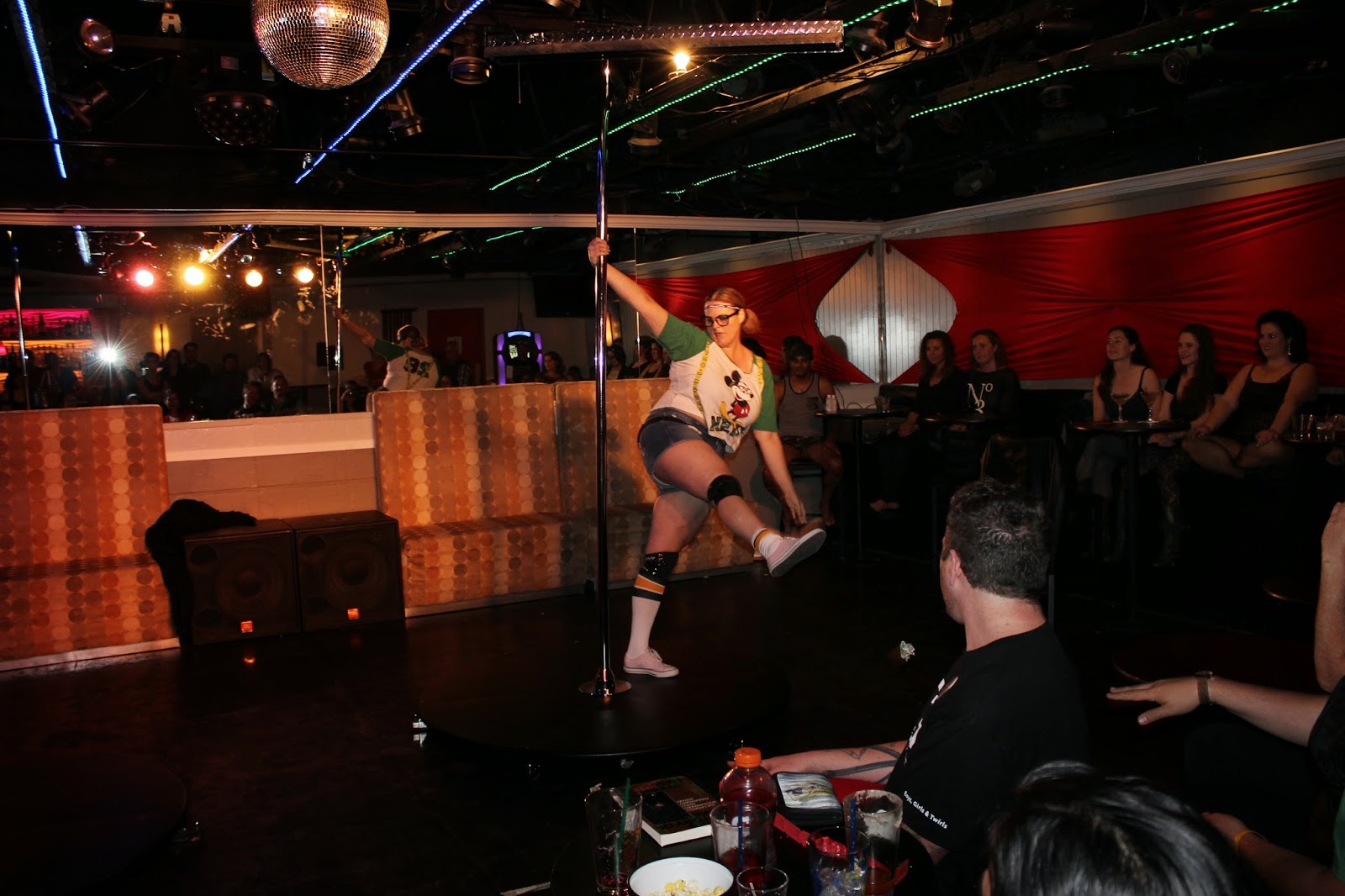 Posted by lolorashel at 10:00 AM No comments: