I guess you can't make everyone happy all the time

So Creepy Tree got a write up on Claycord yesterday!!  Claycord is a local blog/news source that basically covers the Walnut Creek/Clayton (plus some) area.  It was really exciting at first.  But now I'm reminded of what I hate about the internet.

It is SO easy to sit anonymously behind your computer and write mean shit about other people.  Strangely, within the last day or so, people were whining on Claycord's Facebook page about how there haven't been any positive stories lately.  So the guy posts about a story about a tree and now all the assholes come out to talk about how stupid it is!  I don't know...maybe they just caught me on a bad day, but they're all lucky that Claycord hasn't posted their addresses so I can go vandalize their properties (little bit of an inside Claycord joke...I don't really want to ruin anyone's property).

I don't want to dwell on the negative.  On the positive side, Creepy Tree's fan page gained about 100 new fans overnight.  So, I thank Mr. Mayor of Claycord.com for posting a positive story about a beautiful tree that I still love even though some of the people on his website think I am stupid for doing so.  I guess I should be used to it since I know some of my own "friends" have been talking behind my back because of Twirly Girls.  I'm trying to just hold my head high and not let those kinds of people waste my time, but clearly I need thicker skin (or some Pamprin).


The “creepy tree” in Clayton, on Seeno’s property on the hill 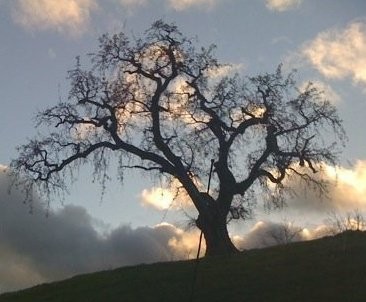 This “creepy tree” is in Clayton, but the cool story about this tree is that some CLAYCORDIAN has set up a facebook fan page for it, and they take pictures of it (almost) daily.
Here’s what the creator of the “creepy tree” facebook fan page had to say….
Every day when I leave the house, I pass the Seeno property. It’s this gigantic house perched on top of a hill. And it’s surrounded by trees and animals. On one side of the hill, there is a lone tree, which I dubbed Creepy Tree. I started taking a picture of him every day and posting them on Facebook. I was (and still am) amazed at how many people loved Creepy Tree too!!
Anyway, I now take photos of Creepy Tree daily. He speaks to me — kinda. It just puts me in a good mood to take my daily photo and think about what Creepy Tree might want to say to his fans on Facebook that day. I try to put forth positive messages, to start each day on the right foot. I love hearing that people look forward to the photos of him every day.
This is awesome, we love the “creepy tree”, too!
To visit the tree’s fanpage, and view other pictures of it, please click HERE.

Shadowgirl — There are some pretty cool photos on the Facebook page. I think that’s why it became a big deal to me. How many photos could I take of the same tree that look so different?

23 Anonymous July 15, 2010 at 10:10 PM
Lame
24 Jason Wheeler July 15, 2010 at 10:53 PM
We used to have a tree on a hill like that in pleasant hill. Used to call it hangmans.
25 EdiBirsan July 15, 2010 at 11:13 PM
A Tree with a Face Book Page, got to make you laugh/ reminds of a story about a “live web camera” web site of fermenting wheels of cheese somewhere in Wales or England.
26 Anonymous July 15, 2010 at 11:49 PM
Really it a tree a tree people what a lame story
27 TwitTwat July 16, 2010 at 12:07 AM
There is already so much crap on the internet, especially on Facebook, why the hell are we wasting fanbook pages on a tree now? Are people that desperate for anything to do on the internet that they have to “fan” a tree? I think people need to spend less time on the computer, their iPhone, the Wii, Xbox, PS3, and their iPod and more time with their families, especially their kids. Be a “fan” of your spouse and your children and get off the damn internet for a few hours you idiotic fools!!! Love your family and leave the tree hugging to someone single!
28 Lori July 16, 2010 at 9:13 AM
Your comment is awaiting moderation.
Talking about a tree is nicer than the economy or state of the world these days. It’s not a 24 hour job. Maybe you shouldn’t have taken the five minutes away from your kids to write this message, Twat.
29 Lori July 16, 2010 at 9:37 AM
Your comment is awaiting moderation.
Twat, I don’t have kids so I guess its ok for me to be a tree hugger. I guess if I was on the internet looking at child porn, you’d be happy I was using the internet appropriately. ------- Facebook comments:

The “creepy tree” in Clayton, on Seeno’s property on the hill
>

Beth Kopec Twilegar
We used to call that the Hanging tree growing up in Kirkwood!
17 hours ago ·

Gerri Baker
I love that tree. It's historic... so don't let the city of Concord take it down.
17 hours ago ·

Lori Myers
They're trying to take him down?!
17 hours ago

CLAYCORD.com
I don't think anybody's trying to take him down.
16 hours ago ·

Lori Myers
I figured he was safe. He's not in Concord anyway.
15 hours ago

Gerri Baker
I know. It was in jest to the city taking down the smokestack.
11 hours ago ·

Lori Myers
I'm sorry they took your smoke stack down. :-(
10 hours ago

Posted by lolorashel at 9:42 AM