I tried to get a "good" picture for today's post.  There is no "good" picture of this crap.  My psoriasis.  It has been pissing me off lately.  The sun is good for killing it...and now that the sun it out, I certainly hope it starts getting better.  The doctor has me slathering four or five different chemicals...I mean medications...just to keep it this "good."

It mostly affects my elbows, down my arms to my wrists.  I sometimes get patches on my knees, face or other parts of my body (especially if I cut myself), but it mostly affects my elbows.  Psoriasis is an autoimmune disease that causes skin cell to grow more quickly than normal, so it leaves dry patches of skin.  It generally starts on the joints, and some people end up with psoriatic arthritis.

You cannot catch it from me, not that some people care to ask or understand.  Most people think its poison ivy.  When I worked at Sears Portrait Studios as a teenager, I had parents refuse to let me photograph their children.  I have been to a day spa for a massage where the therapist refused to massage me without gloves because the red spots meant blood, which meant she could catch HIV.  *sigh*  For the most part, I get it and don't bother trying to explain.

Today, my psoriasis is irritating me, so I am sharing my ugliness with the world.  I guess in the whole scheme of things, I could have a lot worse wrong with me.  Oh yeah, here's some good news:  my face isn't nearly as bad as it has been in the past couple of months, so that makes me happy.  However, I have three different topical medications and an anti-inflammatory antibiotic pill that I've been taking for the last three months.  Maybe the recent sun exposure is helping too.  :-) 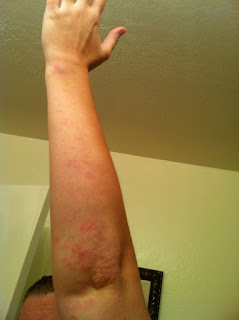