I saw Natasha Wang perform in person at Poletential's Air Show.  She was fresh off her win at the US Pole Dance Championship and I had seen her perform on TV a couple of times.  She is such a beautiful dancer.  I had started trying to do the "toe slide" she did on Good Day LA (It hurts like a bitch but I swear it's going to be part of my Halloween routine), and sent a video to show her.  She seemed genuinely excited that I was trying to imitate her.  I look nothing like her when I do it...but it's a new move and I'm having fun playing with it!  Natasha is so very sweet and gracious in person.  If you have somehow missed any of her performances, you should look her up on YouTube!!
What is your fitness background?
I wasn’t involved in any athletic activity before pole, with the exception of six months of ballet in kindergarten, a summer of gymnastics when I was 12 and volleyball in high school (benchwarmer!). I found pole in 2004 at the age of 29, beginning with S Factor, then The Pole Garage and Be Spun L.A. I also spent two years in contortion training with Stephanie Abrams and David Garcia at Kinetic Theory.
What is your fitness routine (on and off the pole)?
I try to pole every day and cross-train with yoga, Pilates, alternative ballet classes, Chinese pole, contortion and the occasional dance and tumbling class, although this training regimen has suffered recently because of too much travel. I soooo miss the good old days when I holed myself up at the dance studio for up to six hours at a time!
What kind of diet do you follow?
I’ve just returned from Europe where I ate enough bread and cheese to feed all of France, so now that I’m home I’m returning to my fresh veggies, legumes and fruit diet. Let’s see how long that lasts. I’m vegetarian so don’t eat meat, but I could never be vegan. I love my cheese too much.
Do you have a dance background?
No, aside from the aforementioned six months of kindergarten ballet. I used to be way into the electronic dance/rave scene back in my day, so spent a good part of my high school and college years in the club. I definitely picked up some dance tips from the club kids and drag queens in those years.
Which competition(s) do you like to do?  Do you have any title(s)?
In 2010-2011 I won the titles of East Meets West Miss Pole-AM, California Pole Dance Champion 2010, USPDF West Coast Champion 2010, and US Pole Dance Champion 2011.
Scheduling conflicts prevented me from competing in Pole Art this year, but this is a must-do for me in 2012. I so respect what the organizers are trying to achieve with this event.
Where do you train?  Do you have your own pole studio?
I train at The Choreography House and Be Spun in L.A. and have my own practice space downtown. I love the freedom of being a free agent so I can’t imagine owning my own studio anytime soon.
Do you have sponsors you'd like to acknowledge?
X-Pole USA - they’ve been so amazing to me and have treated me like a member of their family.
Kelly Yvonne of the Girl Next Door Show and The Choreography House - Kelly is the pole choreographer to the stars, and my personal muse and inspiration.
Kelly Maglia Couture - she makes the most amazing performance costumes.
Dew Point Pole - such a great product, especially for those with lizard skin like me!
What first interested you about pole dancing?
I started back in 2004 when pole dance classes were still something that women took in secret. It was like we had a back-alley VIP entrance into this super exclusive women’s-only club where we could be as uninhibited as we wanted. As someone who was shy and a wall flower growing up, I loved the freedom I felt from being able to move however I pleased -- without judgment. That’s what first attracted me. 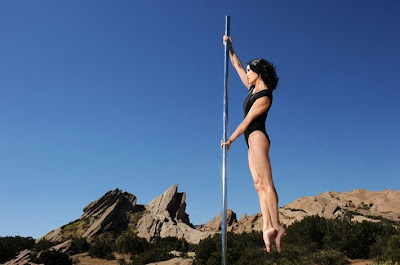 Do you have a preference? "pole fitness" or "pole dancing"
There’s room and a necessity to have both terms in common use, as there are definitely schools and competitions that cater to one style or another.
I’d like to think that what I do is more akin to “pole dancing” as I’m personally more drawn to the artistic or performance aspect of dance.
What do you think about the stripper vs. pole fitness debate?
There’s this fine line between strip culture and pole fitness/dance that organizations, pole brands, schools, students and performers seem always to be carefully treading. And while I understand that some organizations and corporate entities find a need to distance themselves away from the adult entertainment industry in order to gain mainstream acceptance, I think it’s a shame that some pole competitions have openly stated they will not accept applicants who are currently working as exotic dancers. This just feels like a slap in the face to those who pioneered this sport.
What is your favorite product to help you stick to the pole?
I spray Dew Point all over, then use iTac2 on my contact points and Dry Hands on my hands.
How do you deal with the dry skin on pole days (and on off-pole days?)?
I use Pole Physique lotion and Vaseline Total Moisture, always applied the night before I pole. I stick to the pole so much better when my skin’s properly moisturized. Dew Point has also helped with my dry skin too.
Where do you like to buy your pole clothes?
I’m a huge Lululemon fan. I’ve swapped out my professional office clothes for workout clothes, so if I’m going to be in sweats all day, dammit, they better be cute sweats.
I also love Mika Yoga Wear, Pole Skivvies, and when I can afford it, Michi.
Do you like to dance in heels or barefoot?
I love feeling the floor beneath my bare feet.
What did you do before competing and/or opening your pole studio?
I worked as a publicist for nine years at a company called Raz PR - the coolest bunch of ladies in the world (call them if you need PR services! :) I left my job in June to focus exclusively on pole.
What is your favorite song to dance to (at this moment)?
I’m way into a UK band called Wild Beasts right now. I’ve performed to their track “Plaything” a few times already. It’s one of the sexiest songs I’ve ever heard. 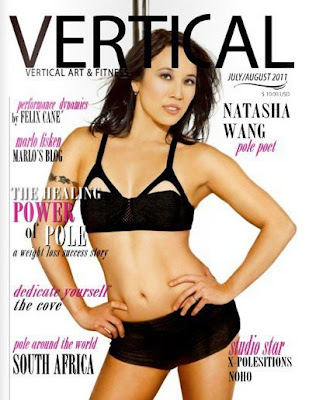 Do you have any other upcoming events/competitions you'd like people to know about?
I’m headed to Mexico City again Oct. 21st for Gravity First, 2nd Edition, then I prep for a two week trip to Sydney in November to perform at Miss Pole Dance Australia on Nov. 4th! This was one of my USPDF prizes and I’m so excited to meet one of my idols, Bobbi from Bobbi’s Pole. In December, I’ll be performing at the next Airshow in Redwood City (hosted by Poletential) and the TEASE Showcase in Denver. And of course, this year’s Pole Show L.A. (hosted by Be Spun). And if my schedule allows for it, you’ll always see me performing at the Girl Next Door show in L.A. This is going to be a busy year, so I have so much more scheduled that doesn’t fit into this interview - I’ll be posting a more complete schedule to my website: natashawang.com.
I’ve had a really big competition year so far, so I’m being selective in the months/year ahead. I’ll likely only compete in IPDFA’s competition in Hong Kong in March and I’m potentially interested in getting some friends together to do a group act for a competition in June.
What else would you like people to know about you and/or your studio?
Find me online! I love hearing from fellow polers! And don’t hesitate to reach out to me directly. I try to reply to each and every one who contacts me.
Facebook: http://www.facebook.com/pages/Natasha-Wang/229400707076759 (Athlete Page) and http://www.facebook.com/natashapatwang (personal Facebook page)
Twitter: @polecricket
Website: http://www.natashawang.com/
YouTube: www.youtube.com/cricketwang
Thanks for interviewing me!
Posted by lolorashel at 11:19 AM