So I am currently three months into taking Enbrel shots for my psoriasis.  Enbrel is an immune system suppressant.  My last update was at two weeks:  http://lolorashel.blogspot.com/2011/08/enbrel-and-psoriasis-two-week-update.html

At two weeks, everything was going well.  My psoriasis had easily gotten 50% better.  But for the last two and a half months -- nothing.  So my doctor is switching me to Humira.

Effect of medication on psoriasis:

So if that makes any sense...there might be a little more chance of side effects (oh, only infections like TB or cancer like Lymphoma), but a much higher chance of the medication working.  The only side effects I really dealt with while on Enbrel were headaches and being sleepy.  Mostly those happened in the beginning and then tapered off.  Maybe that meant the drug wasn't working??  Since the shot is given directly into the skin, my gastric bypass wouldn't have anything to do with absorption issues.

Anyway, I took my last Enbrel shot on Monday.  The Humira comes on Friday.  I was taking two Enbrel shots a week.  With Humira, I take two shots on day 1, one shot on day 8, one shot on day 22, then one shot every other week.  So that will be nice...not having to shoot myself twice a week.  It burned and I wasn't a fan.  I just hope I don't have to deal with being super tired and getting headaches again.  That wasn't fun.

I did find an awesome lotion made by a local guy at a Farmer's Market.  It has been helping a lot this week.  Although psoriasis is a "smart" disease and it gets used to whatever magic product you find and it eventually stops working so who knows how long it would have helped anyway.  The stress in my life hasn't gone down at all (if anything, it's going up), and I'm sure that's not helping the disease either.

So let's see how Humira works!

Latest photo (certainly better than when I started, and looking especially good today because I cheated and put on lotion even though its a pole day): 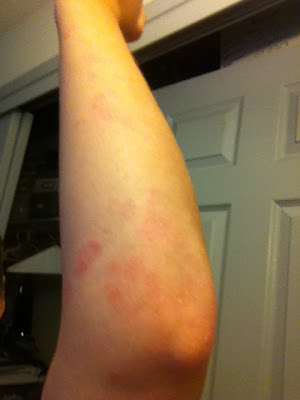