Recently, I started seeing posts on Facebook asking people to "Vote for Bendy Kate!"  Turns out we have another pole dancer on mainstream television!  Last year, Steven Retchless was on America's Got Talent.  This year, Bendy Kate has made it into the finals for Got To Dance, a talent show in the UK.  This weekend, Bendy Kate will go up against five other acts and we need everyone to vote for our pole sister!  I asked Bendy to tell us her story:
I stumbled across pole fitness at my University in the UK and fell in love with it immediately! My gymnastic background meant that I adopted the nickname "Bendy Kate" straight away! There was too many Kate's in the studio and as I was the one doing splits and putting myself into strange positions on the pole so "Bendy" seemed appropriate at the time! After a year of pole dancing I became the UK Amateur Champion. I turned professional when X-Pole asked me to perform for them (which i LOved!!). Since then I won the Miss Pole Dance UK Doubles Division with my mentor Kate Spincity Johnstone, came 2nd in the World Pole Fitness Doubles Championships and won the UK Professional Pole Championships. Pole Dancing has genuinely changed my life, I am now much more confident, graceful, stronger than I've ever been and my creativity has been unleashed! Because of pole I am now following my dreams as part of a circus troupe in the UK doing aerial silks, acrobatics and handbalancing. I hope one day to bring my pole act into circus too!
I entered Got to Dance, a UK Dance competition to try and prove to the public that pole dancing has evolved it is no longer just associated with gentleman's clubs but now is an acrobatic, creative, beautiful form of dance. I auditioned alongside my friend and fellow pole dancer Justine McLucas. The judges loved both of our auditions, we received some of the nicest feedback we have ever had! They gave us both 3 gold stars and we even managed to get the boys Adam Garcia and Ashley Banjo on the pole!
Unfortunately the pole dancers were called back to perform again and me and Justine had to compete against 4 other dancers for the last 2 spaces in the competition. After a looooong day of call back auditions and even having to change my flights to Asia for a circus tour I MADE IT THROUGH :D  I clenched one of the last 2 spaces making it through to the first round of Live Semi Finals after showcasing my acrobatic cabaret chair themed routine to the judges. Justine didn't make it through this time but I have no doubt that she has many great things still to come in her pole dancing career.
I am superrrrr excited about my Semi Final performance on the 29th January on Sky 1 at 6pm. I will be pushing the boundaries of pole fitness and my routine is definitely one to make an impression on the general public (in a positive way I hope!). So please join Team Bendy and support me this Sunday on Got to Dance at Sky 1 as I will be flying the flag for pole dancing and I hope to do everyone proud!!! 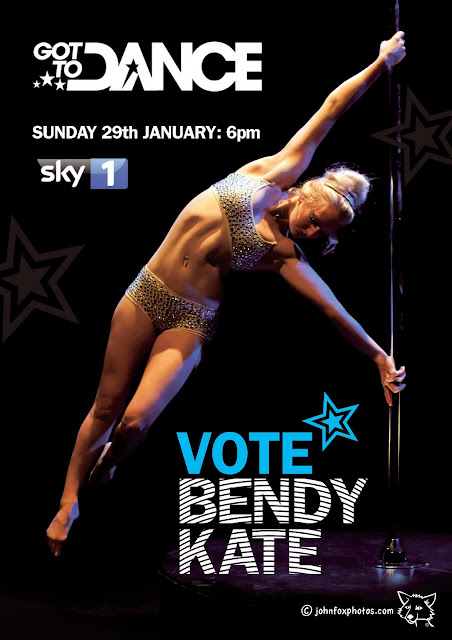 If you haven't seen Bendy Kate perform, check out these links:

Email ThisBlogThis!Share to TwitterShare to FacebookShare to Pinterest
Labels: bendy kate, Got to Dance, pole dance