I recently saw Kelly Maglia perform at Pole Show LA.  I knew she designed awesome performance costumes, but was not aware that she was also a pole dancer!  Not just a pole sister but a curvy pole sister!  She and I exchanged some e-mails and she wrote a great story...so I wanted to include part of her e-mail to me here...and then I asked her a few follow-up questions.  This is Kelly Maglia!

... yes, being curvy has presented some challenges, but I decided early on that I was not going to let it be a problem! I've always been overweight, and yet I was a gymnast as a kid, and then a ballet dancer in college. I always figured I would just have to be that much stronger than the other girls to lift my body weight. Which in my head was no big deal. It's like lifting weights at the gym. Ok, so a 110 pound girl has less to lift than me. So what? It just means I have to be stronger - and isn't that cool? It became a little game I played with myself! All that is to say that ANYTHING is possible with enough desire and belief. I know for sure that curvy-ness need not be a limitation. And isn't it nice to show the skinny girls what's up? :) :) 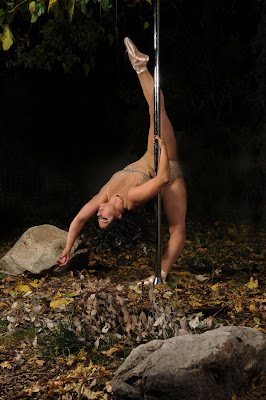 I'm going on and on about this because it's a subject that's near and dear to my heart - and I think to a lot of women! I went through college with an eating disorder because I didn't look like the skinny ballerinas I was training with. I knew that even though I was good at ballet, I would never be hired as a dancer looking the way I did. So, I gave up dance for over a decade.
And then I took my first pole dance class! Ah, the freedom! Suddenly, curvy-ness was OK - and in some cases, even desired! I was accepted for who I was, and it was like having a first sip of water after years wandering in the desert. I was hooked on pole - not only because if the grace and athleticism it required of me - but because I could actually be ME.
Now don't me wrong: I still have fantasies of being a skinny girl! But I'm wise enough now to know that hating myself won't get me there. Neither will too strict of a diet or doing cardio till I puke! I decided that I was going to be gentle with myself no matter what - and interestingly enough, in the 3 years since I've been pole dancing, I've very slowly lost weight. It appears to be continuing - I've gone from a size 16 to a 12 in 3 years, and now, even my size 12 jeans are too big! It's nice to feel lighter and leaner - even though extra weight does not hinder me on the pole one bit. It's even nicer to know that I haven't lost weight because I hated myself. It has happened naturally because I was so IN LOVE with what I was doing on the pole. :)

I first saw Kelly Maglia Couture during the California Pole Dance Championship last year.  Were you a clothing designer or pole dancer first?

I've been a costume designer for the last 10 years. I began designing custom costumes for "regular" dancers. This developed into a catalog collection, Triple Threat Dancewear, that I still run with my sister. Finally, once I discovered that there was a viable market for "pole couture", I launched Kelly Maglia Couture. Since then, I've been lucky enough to have my costumes featured on "So You Think You Can Dance", as well as in Dance, Dance Teacher, Dance Spirit, and Vertical Art & Fitness magazines. 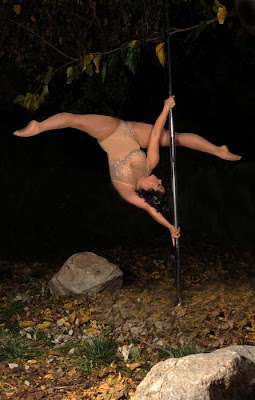 When did you decide to start making costumes for pole dance performances?
Once I started pole dancing, I saw there was a real need for costumes designed specifically for the competition-based or performance-oriented pole dancer. Most of what was available was either workout wear, or exotic dance costumes designed to be revealing - and ultimately removed. This didn't work for the new breed of pole dancer who still needed to show a lot of skin (for grip purposes) but who also needed something tasteful, beautiful, and inspiring to dance in. It was very easy to translate what I'd done for years with Triple Threat into costumes for pole dancers. The biggest challenge was actually to make my designs a little sexier! The typical Triple Threat Dancewear client is a teenage jazz dancer, for whom I need to keep my designs relatively modest. But designing for adult women who want a sexy-but-tasteful design has been really fun!

I understand you also run Kelly Maglia Vertical Theatre.  Tell us about that (especially when we can come see the next performance)! 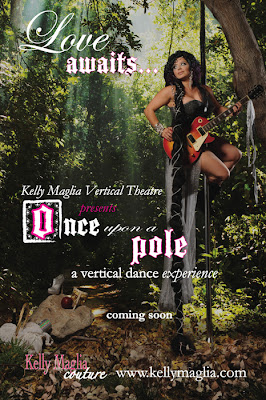 Vertical Theatre is my baby - and is a truly hybrid genre. I like to say "bordello meets Broadway, circus meets rock concert, pole meets stage play." I was a musical theatre performer and rock singer in my late teens/early 20s, but I walked away from all that to focus on play/screenwriting as well as costuming. But eventually, the daily pressures of running my business simply took over and I didn't have time to pursue a writing career. But when I started pole dancing, I immediately saw a way to unite all of my various artistic pursuits. It was the like the pole was a linchpin - and catalyst - to a new vision of music theatre. I realized that the pole could represent so many things, both literal and figurative - the mast of a ship, a tree, or simply a woman's sensual awakening. I wanted to create a new genre of music theatre that was inspired by Cirque du Soleil (but with a nearly exclusive focus on POLE rather than other the aerial apparatus), 80s hard rock, and the classic musicals I grew up on.

Although I'm currently writing a full-length rock operetta, the next Vertical Theatre show will actually be a "rock and pole" cabaret. It's called "Once Upon a Pole" and it will utilize the various fairy tales we know and love to explore the pleasures and pitfalls of modern romance. I'm really excited to add men to my cast this time around, and I will be holding auditions soon. I'm primarily casting pole dancers, but I will also be looking for aerialists, hand balancers, contortionists, etc. The show will feature a live band and we're looking to open in May. And of course, I will design all the costumes!
My last show, "Catalyst" premiered at the El Portal in July 2011. Here's a recap:
I saw you perform recently at BeSpun for Pole Show LA 2012.  Do you enjoy performing?

I do enjoy performing - but don't ask me if I do on the day of! Most of the time, I'm pacing around back stage wondering why I agreed to do this. :) I still get really nervous, and I have to talk myself off the ledge sometimes! But once I get onstage, I feel like I belong there. 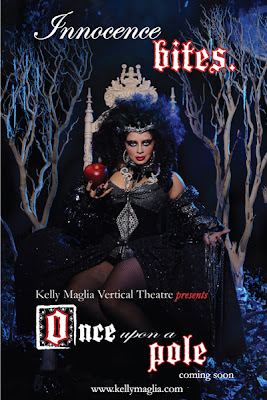 How long have you been pole dancing?

What first drew you to try it?


I initially was drawn to pole dancing because of its combo sensuality and athleticism. I'll never forget the moment I decided to become a pole dancer. I was at a friend's birthday party at Jumbo's Clown Room. And suddenly this woman took the stage, flew around the pole in some amazing way and then ended up hanging by her ankle! She was so strong AND sexy - which is what I wanted to be. I signed up for classes the very next week.
Do you have your own studio?  If not, where do you dance?

I do not own my own studio. I currently train at BeSpun and Cirque School LA, but I have been to pretty much every pole studio in Los Angeles. I spent a lot of time at X-Polesitions before they closed. I find that studying with many different teachers is the best way for me to learn new things, as each person will have a different style and will teach you in a slightly different way.
What else do you do to keep your body in shape to pole?
I cross-train in ballet, contortion, hand-balancing, and I've recently added hiking and strength-based conditioning to my regimen. Needless to say, I'm a little busy. :)

How do you feel like pole has improved or changed your life?
Words cannot even begin to express how pole dance has changed my life. I can only describe it as bringing me back home to myself. It feels to me that Vertical Theatre is what I was born to do. For a long time, I felt like I was wandering - dabbling in dance or music or creative writing. And then Vertical Theatre appeared on the horizon like a lighthouse. And I was home. 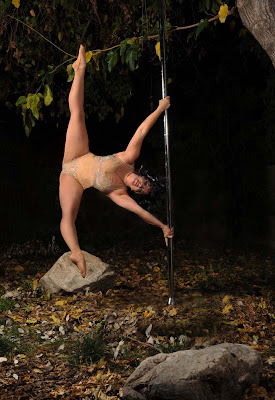 Tell us one thing about you that people might be surprised to hear.
I'm a super nerd! I was that girl who cried over getting an A-. I also won a British Marshall Scholarship (which is the equivalent of a Rhodes Scholarship, but you don't have to study at Oxford) to pursue theatre in London. I love to 18th and 19th century British literature, the French language, social science, animals, and astrophysics. If I weren't an artist, I think I would've been an astronomer or a zoologist!

What does 2012 hold for you?
A new costume collection, and of course "Once Upon a Pole" - which I hope to showcase in a variety of arenas, including the Hollywood Fringe Theatre Festival and the Sunset Strip Music Festival. That will take us up to the Fall, and then I really will have to finish my rock full-length operetta. That's the show I've been waiting to write my whole life...
Posted by lolorashel at 4:30 PM