On a beautiful evening down in Los Angeles, California, I was very lucky to be at BeSpun for Pole Show LA.  Sitting behind me was someone I recognized.  I couldn't place it but I knew she was SOMEONE.  The very short blonde hair...  I racked my brain.  Then it hit me...FRENCHIE DAVIS!  I don't watch a lot of TV but I remembered her vaguely from American Idol years and years ago and heard she was on The Voice.  I was certain that Frenchie Davis was sitting behind me at Pole Show LA.
Ummm....WRONG!
Not unlike asking a woman if she is pregnant when she's just chubby (I've always said, unless you see a baby hanging OUT or her body, never ask), don't tell a celebrity who they are...unless you know with 100% certainty.
I was schooled.  Quickly.  And on Twitter.
The lovely lady sitting behind me was Luenell, the hooker with a heart of gold from the movie, Borat.  In my defense, I haven't seen Borat since it came out six years ago!  Ahhh but there is no excuse and I feel very lucky that Luenell has tolerated me ever since.  I found out she learned how to pole dance for the upcoming movie, That's My Boy with Adam Sandler, so I wanted to include her in my blog.  Since she travels a lot for movies and her comedy tours, typing her answers out for me wasn't an option.  We tried a Skype session but the audio somehow wasn't recorded.  Then Luenell came to town on tour, so I loaded up Rita and some camera equipment and off we went!
Here is the video interview with the hilarious and amazing LUENELL:
Here are some photos (including one of Frenchie Davis...so you too can make fun of me for being an idiot): 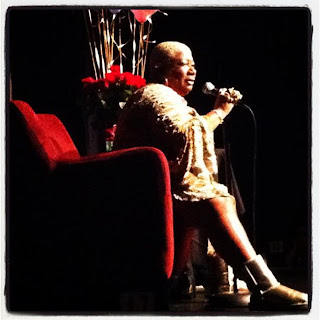 Luenell on stage at Tommy T's in Rancho Cordova for her surprise birthday party! 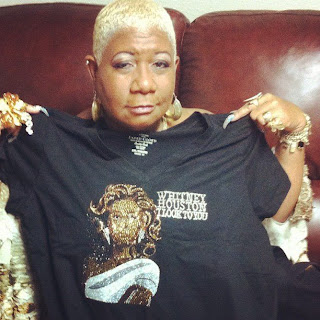 Luenell showing us one of the awesome t-shirts that was made for her. 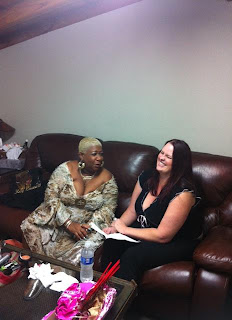 During the interview...calling me out for calling her Frenchie. 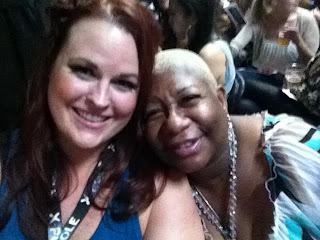 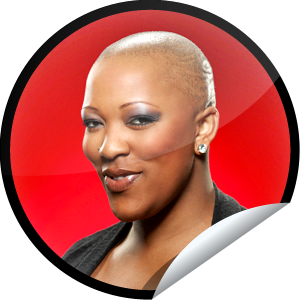 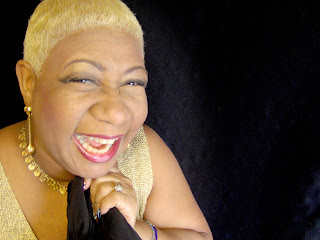 LUENELL!
Here are some photos from our evening at the comedy show:  http://www.flickr.com/photos/lolorashel/sets/72157629281986422/
Keep up with Luenell at her website, www.heyluenell.com, or on twitter: @Luenell.
Posted by lolorashel at 11:42 AM