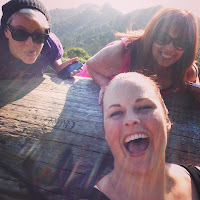 Last weekend was one of those unexpected, fun adventure weekends.  I knew Nadia Sharif would be in town but couldn't sign up for any workshops.  Wonky foot is having a bad life right about now (surgery in two weeks!!).  I did, however, hope to at least see her since she is the biggest lover of my boobies (it's good she doesn't mind them...they are face height for her). 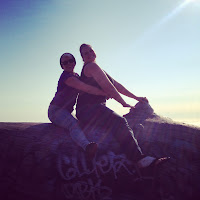 On Saturday, my good friend Kate from Pole Etak had hooked up some of us Twirly Girls with the opportunity to have bit parts on a reality TV show.  If you've ever filmed a reality TV show, it isn't all that real.  But we got to sit around for the afternoon and chat and have fun with our friends while we were waiting for our turn.  The show is called Let It Ride, which will be on the National Geographic channel.  You can read an article about it HERE. 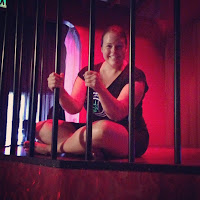 That evening, Kate, Rita and I met up with awesome pole ninja, Nadia Sharif to have dinner.  On our way, we stopped for a photo adventure on Grizzly Peak.  It is really beautiful up in the hills between Moraga and Berkeley.  And it often feels like I am rushing from one thing to the next without really enjoying what I'm doing.  So it was nice to take a few minutes to be silly and take in the beautiful views. 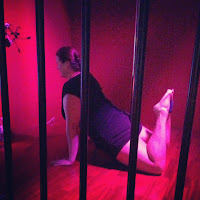 On Sunday, Nadia had a workshop at Sedusa in Campbell, California, which is about an hour away.  She asked if I could drive her and I am always down for an adventure with Nadia!  I asked if Kate could join us.  She did and we had a great time.  The studio was really beautiful.  There were ten poles in the main room -- three up on a stage.  There was also an 11th pole inside a cage on the side of the room, which I claimed as my home.  It was awesome.  I loved the cage. 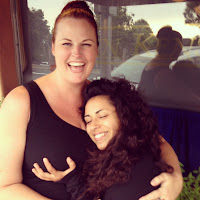 My foot really limits me physically right now but I did do the warm-ups for each workshop.  Oh man was I sore on Monday!  I made me realize how much strength and flexibility I've lost since my foot really started hurting in April and I started limiting my exercise.  I have made a new commitment to at least get some yoga in four or five times a week (which I did last night at Grace Cathedral in San Francisco -- Yoga on the Labyrinth -- check it out!). 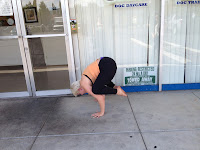 After the workshops, we stopped for dinner before delivering Nadia to the airport.  Kate was participating in a yogangster yoga pose photo challenge.  So, in front of the strip mall restaurant, we stopped to take photos of Kate attempting a crow pose variation with her leg extended behind her (I couldn't even dream of doing it).  A drunk dude from some nowhere bar (no really, I think it was called Nowhere Bar & Grill) came out and was staring and talking shit. So we left and Kate didn't get her official yogangster pose.  He felt like Nadia and I weren't being supportive enough of Kate.  bahahahahaahahahahahaha!  He drunkenly stumbled to his motorcycle where his wife informed him that he'd ruined our day.  HA! 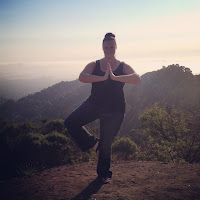 We left San Jose and sadly dropped Nadia off at the airport.  Kate and I continued our adventure into San Francisco where I dropped her off at her apartment in the Tenderloin district.  The Tenderloin in San Francisco is such an interesting place.  Mostly little white girls like Kate should not be hanging out in that area.  The night before, there had been two shootings within blocks of Kate's apartment.  We tried to find the body chalk outline but apparently the police don't use those anymore.  I dropped Kate off and started my own adventure across the Bay Bridge to get home (WTF is up with that much traffic on a Sunday?!).

Thanks again to all my poletastic friends for a lovely weekend!!  I can't wait for the next one!