Awhile back, Trixie from Pole Nation asked me if I would come judge a competition.  I immediately told her no.  I felt like I wasn't qualified to judge people on moves I couldn't do myself.  She assured me I would be just fine and asked me again to please come help judge a Pole Dance America (PDA)preliminary competition at a studio in Santa Cruz.  Well, you know me, always up for an adventure.  So I said yes! 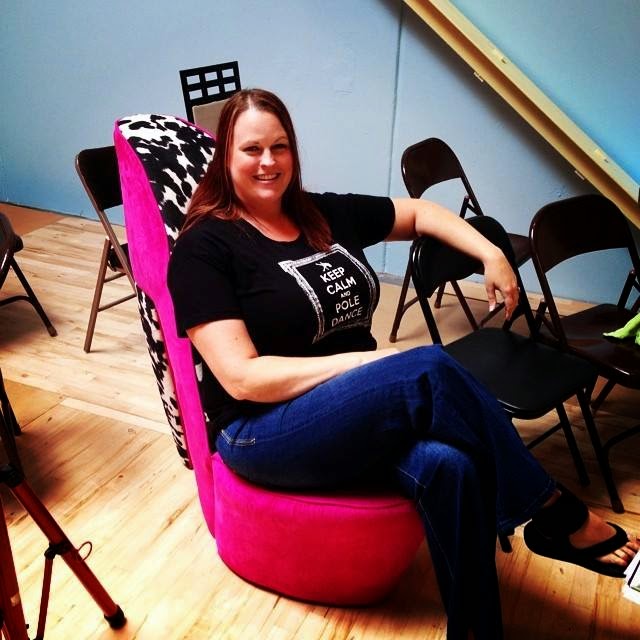 The competition was held over the weekend at Aerial Arts Santa Cruz.  The studio had really tall ceilings, with room for many aerial apparatuses.  As soon as I walked in, I eyeballed the chair I needed to sit in.  The other judges kindly allowed me to have the queen chair.  The competitors were made up of students from Aerial Arts, and I don't believe any had ever competed before.  PDA travels to studios all over to the country to hold these preliminary competitions.  Their finals will be held next year.  Round 1 is done without music.  Each competitor writes down the official moves on which they would like to be judged.  The round is videotaped, and after they were done, we got to review the video and judge each move individually.  I had been worried about being able to judge people on the fly.  But being able to review the video, rewind and re-watch moves really, really helped.  And if there was a move that I wasn't sure about, I looked it up to make sure I was judging it properly.  It was a long process, but it made me so much more confident that I was able to offer a proper score and constructive feedback.

Round 2 allowed music and was a more traditional pole dance showcase/competition routine.  We got to score based on the creativeness and the musicality, etc.

The entire day was a lot of fun.  I enjoyed seeing the studio, meeting Jeanette of Aerial Arts and fellow judge Donna from Atomic Allure (a studio in Oakland, which will be holding its own preliminary competition in October).  I appreciate Trixie for thinking of me and giving me this fun opportunity to learn more about how their organization and compeition work!  Congratulations to the winners, who will be moving on the PDA finals in New Orleans next year!
Posted by lolorashel at 9:34 AM