Just a few days ago, I returned from my epic adventures at the 5th Annual Pole Expo.  I have attended four out of five years.  2013 was pretty epic as I was in my walking boot post foot surgery.  And 2014 ended up being epic thanks to me flipping out of the fly gym, smashing my face on the ground and injuring my foot and spine.

In 2016, I successfully attended Expo without injury.  I did not arrive with any injuries and I did not leave with any.  I am not counting the fact that I hurt my back dragging my 50 pound suitcase around BART on my way home -- I made it out of Vegas injury free!!

This trip was a whirlwind.  I flew in last Thursday and essentially went straight to my room to get ready for the Pole Classic competition and showcase.  The Mighty Grip team kindly invited Robert, Janette and me up to their VIP suite.  I have to say this was one of their best shows.

Friday began with a floor workshop with Rafaela Montanaro.  I am not super flexible and the room was packed way too tightly, so I feel like I didn't get to perform well.  I also feel like it is difficult to learn a routine in an hour.  I did, however, video it and want to work on it further at the studio.  I then had an underwater photoshoot with Brett Stanley.  It was an interesting experience.  I bought the nose plugs (literally could not have done the shoot without them).  However, in my first pass underwater, I took some water in and came up coughing.  So, I got nervous that it was a sign of things to come and had to calm myself down.  Brett was great, though!  He is very calming and he would give me advice on posing each time I went under.  I certainly didn't do any epic pole moves (which I was hoping for since I was weightless in the water), but I am happy with many of the shots and am excited to see the official proofs.  (The one I attached here is just an unedited phone shot of his iPad.)

Friday evening was pretty awesome.  After I booked Pole Expo, I found out that my favorite band in the wholewideworld, Pepper, would not only be in Vegas on the one night I didn't have plans -- but would be performing in my hotel.  That was a no brainer.  I picked up tickets immediately.  They did a meet and greet at the tattoo shop beforehand, so I got to meet them again.  My yoga instructor, Theresa, trained with the lead guitar player's wife, so we also talked about yoga for a bit.  The concert was at the stage by the pool.  It was hot so my night ended with me in my bra and underwear in the pool.  I guess next time, I'll just plan accordingly and just bring a bathing suit.  You're welcome to the guy who kept losing his shit and thinking I was giving him his own personal strip show.  The show was off the hook and I had a great time!  Thank you to Angela and Justin for coming to the show with me!

Saturday started out a little more quiet.  I sat by the pool.  I had a flexibility workshop with David C. Owen in the afternoon (yeah, I suck at it).  Then, while most Pole Expo'ers went to Pole Show LA Vegas, Robert, Janette and I went for my very first strip club experience.  We had received a tip that locals liked the Palomino.  It was about a 15 minute Uber ride away, but it was worth it.  I think I expected to go in there and see abused women who were being forced into slavery, but I really didn't get that vibe.  I met a couple of really cool girls.  We sat along the stage and threw extra dollars for the girls who could actually do pole tricks.  I loved it! 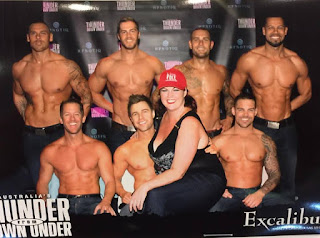 Sunday I woke up early to have my make-up done so I could do a photoshoot with Somer.  I think most people showed up wearing pole outfits and I busted out my pirate skirt and corset.  The shoot went really quickly and her direction was easy to follow.  I am also excited to see these proofs.  Sunday's workshop was Stripcraft with Lux ATL.  I love Lux's passion as she talks about accepting yourself.  I'm not even into chicks but her eye fucking alone during a lap dance is pretty fucking hot.  I also got to meet Eda from Eda Marbury's Climb To The Top.  We are besties now as we lapped dance each other in class.  Sunday night, Robert, Janette and I essentially ended our trip the best way we could -- front row for Thunder From Down Under.  It was a super fun show, but it was almost more entertaining to watch these ladies lose their shit for a little man meat.  I think I liked it because they didn't get down to banana hammocks during every performance.  I like to leave a little to the imagination.

I flew home Monday to the post-Expo blues.  I'm still recovering from that.  There are so many people I didn't get to see (what, Nadia, how did that happen?!).  But I am looking forward to next year already!  Thank you to everyone I did see -- you helped contribute to a really fun trip!