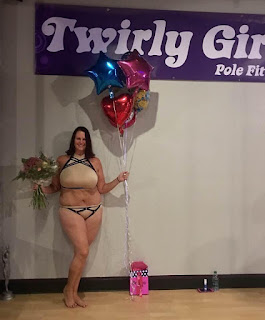 I just completed Month 2 of Operation Upside Down.  And by using the word "completed," I just mean that the month did, in fact, happen.  My last update was from Week 4, and you can read that HERE.

August is the month of Northern California Pole Presentational.  We had our fourth annual event on Saturday, August 26.  It is an entire day of pole dancing.  We set up Friday.  Practice starts at 7 AM on Saturday, and the show runs from about 9 AM to 5 PM.  Then we tear it all down.  The entire month of August each year is generally spent collecting and organizing music for 70+ dancers, making spreadsheets, signs and lists, writing the script, gathering information from sponsors and vendors, designing a program, etc.  Basically, I get off work and I go home to park it on the couch and work some more.  I also started doing hospice volunteer work recently, and that has added to my already full plate (although it is rewarding work).  I did make it to a few classes sprinkled throughout the month, however, I was certainly not in gain-strength mode.  Last night was the final day of August --  my 41st birthday -- and my final chance to squeeze in a class before month 2 ended.

Do I feel stronger?  Yes and no.  I kept up my yoga practice, and I also tried lyra during the month of August (I did a lot better than I expected).  I am sure I have mentioned before that I gauge my general strength based on how I feel during "chaturanga."  My chaturanga is decent right now.  I don't crash chest first into the floor as I start to lower.  However, when I tried chopper last night, I felt awkward and weak again.  Perhaps it was because I hadn't choppered all month.  I feel like Janet really has to push me into the move.  Ellen had mentioned last week that I may want to try kind of pushing off of Janet's arm so I'm having to push my own ass into the move.  I worry I'd break Janet.  She's mighty but she's so tiny.

So anyway, here are some videos from August.  Slow and steady wins the race, right??

Practicing on vacation even:

Upside down with Jen:

Routine with the Dizzy Divas:

And last night's chopper with Janet:

Thank you to everyone who is being patient while I slowly navigate the upside down world!  I know I play around a lot but I really am enjoying the process. 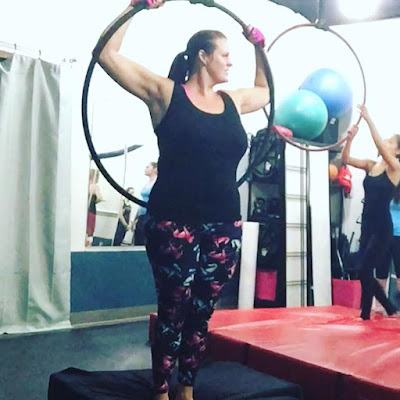 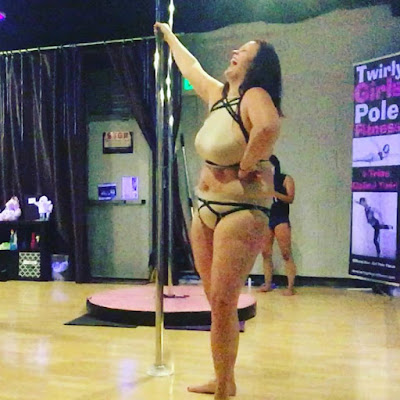 Posted by lolorashel at 9:06 AM