Weighing in on the debate - Pole dancing in the Olympics

Lately, pole dancing in the 2012 Summer Olympics has been a hot topic.  Of course, my friends know that I am ALL about pole fitness, so everyone has been asking my opinion.  I've been busy with work so, although I have glanced at some articles and blogs, I really haven't paid a lot of attention to them -- just quick glances through.  Nor have I had the chance to think about my actual opinion on the subject (any time someone sends me a link on Facebook, my response has basically been: "HELL YEAH, PUT POLE DANCING IN THE OLYMPICS!").
Tonight, Rita sent me a link to a blog asking for people IN the pole industry to weigh in on the subject.  So, here goes!
When the posts about a petition to get pole dancing in the Olympics first started flying around Facebook, I (superficially) supported it wholeheartedly (see over-exaggerated response above).  Of course I believe that the athleticism required to be a pole dancer is so much greater than some of the sports I just saw in the Winter Olympics (hellooooooo, what the hell is CURLING and does it require ANY athletic skill?!).  Why wouldn't I support pole dancing in the Olympics?!  I do love the "what's the difference" photo comparing vertical pole to the uneven bars.
However, the more I think about it, the more I don't really care.  It's not that I don't care about pole dancing.  It's just that I don't care about the Olympics.  In my 33 years, I can't say I've EVER sat down to watch the Olympics (other than short recaps on the news each morning).  I didn't watch the Winter Olympics, which I believe ended yesterday.  And I probably won't watch the Summer Olympics in two years.  (I don't have a problem with the Olympics -- I just don't get into "events" on TV.  I don't watch shows like the Oscars either, if that makes everyone feel better.)
I do remember scanning one of the blogs...and someone mentioned something about standardizing the names of the twirls.  No thanks.  That's the artistic beauty of pole dance.  I want people to be able to express themselves through their dance without someone telling them what they have to call their moves.  So, while I would love to see pole dancing and pole fitness become more accepted, I don't want it to become so trendy that associations need to come in and make a bunch of rules, which would take all of the fun out of it.
So, if it's important enough for others to want it in the Olympics, then I passively support their bid.  However, I am not passionate enough about it to rally the troops for this cause.  I enjoy being in my own space, with my friends and my twirls.  I don't need the Olympics to make it legitimate for me. 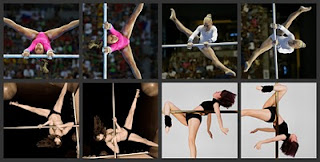