Next Pole Goal: The Splits

So, even though I hit my first real pole goal of inverting four months early, I'm not exactly a regular inverter yet.  I'm considerably larger than most of my classmates, so in the interest of safety (needing a spotter), I have only inverted at two different classes.  I realize I need to strengthen my core, so Andrea has suggested that I hold plank on and off while watching television.

While I am getting ready to further that pole goal, I have set a new one.  THE SPLITS!  I want to be able to do the splits.  I don't even know the difference between regular splits and the "Chinese" splits, but I want to do them.  So, last week, we took a photo in class to see how far down I could get.  I was actually pretty surprised.  I don't have as far to go as I would have thought.  Even with the scars from my inner thigh lift and the fact that I've never been very flexible anyway, I got down pretty low.  I tried again this week, and thanks to running for couch to 5k, I was REALLY sore and stiff and didn't get down quite as far.

But at least I have a starting point...and here it is. 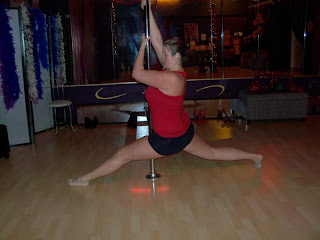 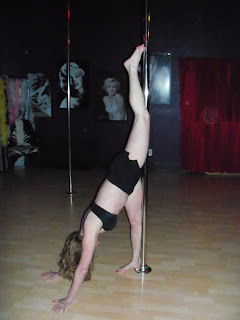 Posted by lolorashel at 9:31 AM