If my math is correct, you've been pole dancing since 1999.  That makes you a pioneer of pole dance!  I understand you worked as an exotic dancer in your early pole dancing years.  How do you feel that experience shaped you as an instructor later when you opened the Bombshell Ballroom?

I actually started dancing as an exotic dancer in Detroit in late 1998. I was fortunate to work with some amazingly beautiful, sensual dancers that treated their work as art even then, and I was so inspired by the atmosphere itself, and it really shaped my dance style. Transitioning from dancer to teacher was trickier. When I started teaching there wasn't this wealth of information and community that we are blessed to have now (Yay pole!!) so I only had what was in my personal little repertoire, and I had to teach myself to break down exactly what I was doing with my body in these movements, so I could convey that to my students. We have come so far, it's amazing. We have a great community, and we're always inspiring each other, brainstorming with each other, and teaching each other. The bar has been raised, and pole is taking off! We're really going to see this movement go in some amazing directions. (It has already!) 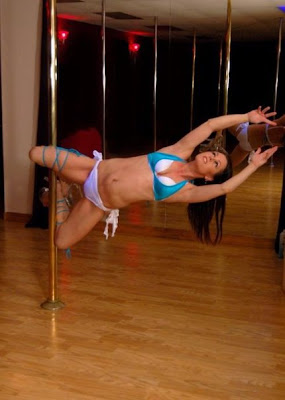 Who are other pole pioneers that you admire?

The first person I ever met from our community of pole dancers and athletes was Pantera. I had just kinda found the little tiny pole dancing community then, and she just so happened to live in Seattle, so we met up. She introduced me to the spinny pole that day (I had always used static poles), and I got pretty green in the face playing on it. She made me tea! Sweet girl! Her strength and discipline is amazing, and if you have never seen her perform live you MUST. She is incredible, and she is an awesome person as well. She has certainly taken pole places, and been a kickass supportive friend, so of course, she's one of my favorite pole rockstars.

Another one of my favorite pioneers is Alena Downs. She started the Pole Junkies forum, which was one of the first of it's kind, and I loved playing there! She's fearless, and never been afraid to put herself out there. She has done amazing things in building up what Pole Junkies is today, and when she started the Pole Junkies Pole Camp, I think it was the first (or at least one of the first) kind of even that brought dancers from all over the place together for a weekend intensive of classes, and tons of other pole fun. Now she has several studio's in Canada! Go PJ's!

And of course, my favorite YouTube rockstar to go competitive, Karol Helms. She was one of the first girls I met on YouTube, and her musical tastes and mine were so similar, we were always commenting on each others videos. I love her style, she's so bendy, and graceful and damn STRONG!

All three of these women brought pole out of the club scene, and told the world... "Hey, this is ART. This is Strength, this is grace, and this is to be respected."

You now teach at the Brassy Butterfly in Portland, Oregon.  Is the pole dancing scene different on the West Coast than it was in Detroit?

Sadly, when the pole community started to develop in Detroit I was already gone. When I was in Michigan, the pole scene for me was the club scene itself. I have met and communicated with many of the Detroit girls though, and they are great girls, who do great things for the midwest scene. A couple of years ago we were lucky enough to get Detroit native Ozzypoles to transplant here in the Portland area, and she's starting to organize showcases in Portland (Queen's of the Pole: Rock the 90's was the first one). We've got studio's a plenty out here, and we have a large industry (club) scene as well so we have a lot of events going on. When Pantera was in Seattle she organized the first showcase events that I know of as well (Hysteria, and Delerium at Noc Noc) I performed in the first Queens of the Pole event, as well as one of the Hysteria events, and one of the Delerium events in Seattle where I did a pole set, and a short Lyra set. There are video's from all three events on my YouTube channel.

I know your son is only six and has probably grown up knowing that pole dancing is perfectly normal.  Have you had to deal with mothers of other children judging you for your career choice?  I have had some friends with children deal with judgmental people lately so I'm always looking for witty retorts.  :-)

Yes, my son views pole dancing as completely normal, and he plays on the pole in my living room more than I do. He's actually quite coordinated and strong. It's impressive. I haven't really had to deal too much with any judgmental mothers, or perhaps I just don't bother to notice the judgments. I don't do anything inappropriate in front of my child, and I don't consider my dance to be inappropriate either. My child will grow up with an open mind, or at least the option to have that open mindedness, that some other children may not have due to biases in their parents. I also hope that my lifestyle gives him a good sense of body confidence, and an interest in art, dance, music, and athletics. I'd rather teach my child to love art than to be hateful or judging in any form. 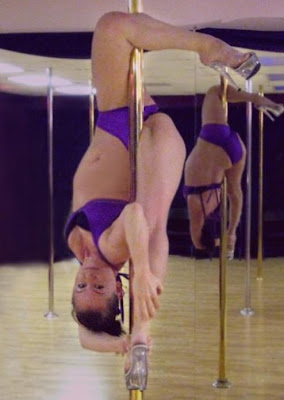 Tell us one thing about you that people might be surprised to hear.

I think I have said this before, but it's a big part of who I am... I LOVE motorcycles, and I LOVE quads. I'm a tomboy, and I like to play in the dirt and sand. I'm also big on video games. I have a Wii, Xbox 360, PS3, and two computers. Does that make me a nerd?

Hopefully with 2012 comes some big changes. I'm in college, I just finished my second year. I'm transitioning now out of my prerequisite classes, and getting ready to shift gears and get ready for the nursing program. This consumes a good majority of my time. However, I'm trying to keep myself in shape, still teaching pole classes, and performing in February in the next Queens of the Pole event, and I'd like to make it to the pole convention as well since it's on my side of the world this year!

If it means anything to you, Aimee, I LOVE NERDS!  Please catch up with StarrGrrrl on FACEBOOK or YOUTUBE.
Posted by lolorashel at 3:25 PM