Circus Side Show with Kara Nova!


What first brought you to pole dancing -- and how long have you been doing pole?

I've been poling for nearly four years. I discovered pole upon moving to the Bay Area (from the Midwest) in 2008. I have always been an artist of one medium or another, pursuing photography and creative writing back home; when I moved to San Francisco and found pole dancing, I was absolutely mesmerized! I'll admit, my first exposure to the art occurred within the dimly-lit exotic clubs in North Beach-- some of my friends were dancers at the time. One in particular introduced me into the competitive world of pole, showing me videos of Felix Cane and Jenyne. Soon after, I bought an X-pole for my tiny apartment and began to practice, primarily teaching myself the basics and occasionally taking a workshop when the pros came to town. 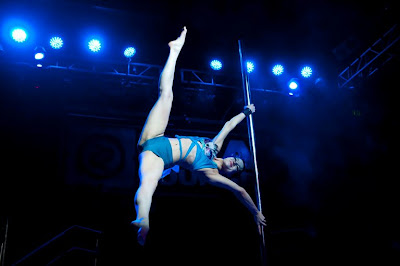 My friend and I attended USPDF weekend in 2010 (the year Alethea won), and that trip really inspired me to take my poling to the next level. That summer I submitted a video to a contest, hoping to enter the competitive world of pole, but I never made the cut. Feeling somewhat discouraged, but still yearning to perform, I sent the same video to the manager of a local burlesque and variety act troupe and he immediately invited me to perform with his ensemble. So in 2010 I began performing locally with Hubba Hubba Revue, and since then so many more doors of opportunity have opened! Last year I was recruited by our West-coast circus, The Vau de Vire Society, and I can now officially say I've run away from home and joined the circus. 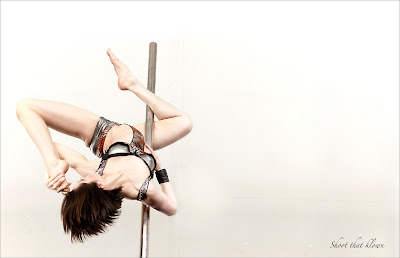 In retrospect, I'm glad I never made it into that competition, because I may never have found my local burlesque and circus world. "Performing" rather than competing really allows me to express my creativity, too, rather than stress about being "the best." This past Halloween I did a "Resident Evil" themed act with back-up zombies, so needless to say, this outlet certainly nourishes my creative spirit.

It looks like you have some circus training in contortion...tell us about that.

A friend recommended that I check out the San Francisco Circus Center for flexibility classes. About a month before joining my burlesque group, I began taking a beginning contortion (aka acrobatic stretching) class with my teacher Xia. I'm naturally very strong, but I had never been able to do the splits (or anything beyond).

Attending that class, and the SFCC in general, really changed my whole perspective. The SFCC trains recreational students, but it's also a training facility for professionals who are pursuing careers in the circus field. The trainers and instructors are some of the best in the world. For a year, I was attending my beginning contortion class 1-2 times per week; in addition to gaining physical progress, I gained so much inspiration and insight from mingling with the staff and students there. Somewhere along the lines my passion for circus began to surpass my original passion for pole dance-- which is a story unto itself-- mostly because circus is much older and requires such patience and discipline. The pole world sometimes frustrates me because everyone desires immediate results and abilities, hoping to nail the newest move, but, in circus at least, the performers endure years of training and conditioning before certain moves are 'ready.' It takes time and a severe dedication. 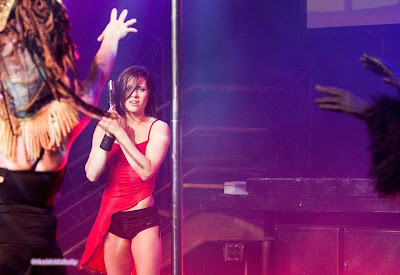 These feelings flowered a love of contortion, and I've been cross-training in this field since 2010. After about a year, I gained over-splits and my legs made tremendous progress. I should note, though, that in addition to attending the class, I also did my 'homework.' If you're hoping to increase flexibility, you have to stretch every day in the beginning. I like to think of the muscles as Play-Doh-- you take it out of the jar and it's stiff but, through warming and molding, you can begin to stretch it and make it more pliable. With contortion, through daily practice, the muscles begin to adopt the new, more flexible shape, slowly but surely.

I'm fortunate to have some of the best contortion trainers here in San Francisco. I don't think I'll ever 'be a contortionist,' but I'd like incorporate a lot of contortion-influenced moves into my act. It would also be cool if I could sit on my head, which requires absurd back flexibility, but I'll cross that bridge when I get there.

Where do you train?

Do you teach as well? 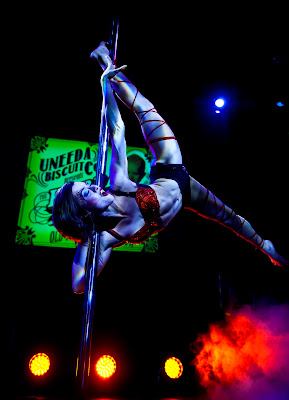 Where can we see you perform?

I live at DNA Lounge. Okay, not quite, but I've performed there a ridiculous amount of times. I perform pretty frequently in the Bay area, and occasionally along the West Coast. If anyone wants to check out a show, I have a calendar on my website-- karanovasf.com

It feels like the pro/competition pole dancers are all going the route of contortion and extreme tricks.  Do you feel like something is lost from pole dancing when it is all tricks and no dance?

Good question! Since pole has gained more momentum the past 5 or so years, it has begun to grow in so many various directions. There's also a plethora of organizations and affiliations trying to establish their own version of pole. Originally, the Australians (like Bobbi's) and USPDF spearheaded the movement with the sexy and athletic styles of Felix and Alethea, pushing high-heels and fluid floor work. Later, other groups and competitions began arising, focusing on the 'sport' of pole. Some of these organizations are trying diligently to distance themselves from the exotic roots of pole, even forbidding those in the adult industry from participating in certain events. I personally think these policies are very insulting to a number of people. I mean, take this with a grain of salt, but exotic dancers made huge contributions to the current state of pole. Before the large affiliations were even created, local clubs were holding pole contests, and some of the most famous polers out there today were born from these strip club competitions (for example, Pantera!). It's stupid for an organization to take something that dancers helped create and then excommunicate them from the community. I think these groups are purely thinking about business and profits rather than nourishing the community and promoting values of awareness and acceptance. 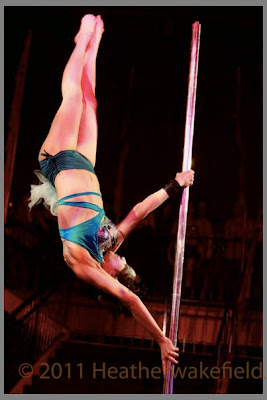 I think that pole is really confused with itself right now. In addition to the original high-heeled pole styles of USPDF and Bobbi's, we now have elaborate spinning-pole routines that resemble ballet and lyrical dance, and then there's also pole acrobatics drawing from the ancient sport of Chinese pole, which is a circus discipline. These branches of pole are fantastic, as it's beautiful to see how this apparatus can lead to so many different styles and movements, but because these styles haven't officially been distinguished from one another I think that many people are confused about expectations.

On a competitive level, whereas a few years ago there were people with gymnast and ballet backgrounds, we are now seeing competitors with backgrounds in circus, like Rebecca Starr or Timber Brown. When an individual has a background and has been thoroughly trained and conditioned in a physical discipline, they have a much greater advantage than someone who lacks this training. I feel like the bar is being raised to super high standards, which is fascinating to observe as a spectator. However, it's a little disheartening to those aspiring competitors who lack backgrounds. It's almost as if the rest of us are left aspiring towards something that we'll never quite reach, at least without years of dedication, first.

This is the reason I really encourage people to develop their own styles. It's nearly impossible to be able to do everything. Even the professionals play to their strengths, whether it be flexibility, choreography, strength, endurance. Find something that you like and explore your potential, rather than trying to conquer every move that comes along. Oh, and don't forget to have fun!

Who are pioneers of pole dancing that you admire?

What advice would you give to brand new pole dancers?

Make sure that you stretch!! Poling will transform your body and strengthen your muscles, but this new strength will also lead to tightening, particularly in the upper back and shoulders. Stretch stretch stretch so that you are a limber ninja!

Tell us something about yourself that people would be surprised to hear.

People are often surprised to learn that I myself lack any gymnastics or dance background. I ran track and cross country (very slowly). I simply dedicated myself to this craft and have stuck with it. I'm very grateful to live in a city that harbors these endeavors and provides outlets for such shenanigans.

What can we look forward to seeing from you in 2012?

More ridiculous shows, costumes, and make-up jobs. Also, before the end of the world happens, I'm really hoping for a solid handstand and a kick-ass backbend!