I headed down to Long Beach to visit Wes and Larissa again last weekend and decided to take a class at OC Pole Fitness' Huntington Beach location.  I previously did a Poletry in Motion for the Aliso Viejo location of OC Pole.  I guess this isn't technically a Poletry in Motion since I didn't actually take a pole class.  Instead, I took a cardio cabaret chair class with Felicia.  However, there were poles in the room, so I'm still gonna call it Poletry in Motion!

First off, the current Huntington Beach location is kind of hidden in the downstairs of an un-manned gym.  When I arrived, there was not one person at the desk or working out.  However, the door was open and I could clearly see the OC Pole Fitness sign on the window, so I figured I was in the right place.  I waited a few minutes near the desk before I got brave and decided to go hunting for a room that may have poles.  I found a cool spiral staircase and decided to venture down them.  Once I got downstairs, I saw the OC Pole sign again, heard the music and realized another class was still in session.  So I got comfy and hung out until it was time for my class.

This Poletry in Motion will only be valid for a couple more months as I understand they have a new Huntington Beach location opening in January.  I am really hoping to make it to their grand opening party.  I imagine, however, that Felicia will remain an instructor, so then I guess that re-validates my review.  :-)

I liked the studio space with its red walls and ballet bars all around.  It was perfectly tucked away in that bigger gym with blacked out sliding glass doors so no one could peek in while you are dancing.

I guess only one thing really needs to be said about this class, I SWEAT LIKE A PIG!  I had braided my new red hair all purdy so it would be wavy and sexy, all ripe for whipping around during class.  It was drenched within 20 minutes, so I did most of class with it wrapped in a bun so I didn't whip sweat into my own eyes (or even worse, into someone else's!). I definitely burned some calories (and my butt muscles).

We learned three short pieces to a chair routine (each were four counts of eight), perfectly counted out for us by Felicia.  We practiced each piece, separated by some killer abs and other strengthening exercises in between.  At the end, we put the routine together.

As I have said many times, I am not the best dancer, but I do enjoy dancing.  I am also pretty good about counting (since I essentially "grew up" during the step aerobics craze), and I can follow an instructor decently (so long as they don't say, "now its your turn!" and leave me to writhe in the middle of the floor while they watch).  I do miss little parts here and there but can usually catch up by the end and at least look like I was in sync for most of the routine.  The great thing about cabaret or burlesque is that there are usually a few spots where a pose is held and it gives me a split second to get back in line with the group.

What I lack is some style...or personality or something.  I feel like I am just copying the moves and I wish I had a little more confidence and could just do my thang without worrying about whether I'm on the right move.  I feel like when I don't think about dancing, that's when everything comes together.  I, however, over-think EVERYTHING.

At the end of the day, though, I had a great time.  I loved the routine, I sweat my ass off, my abs and butt were sore and I had a lot of fun.  Felicia is adorable and I can't wait to go back and take it again (with Rita and Larissa this time)! 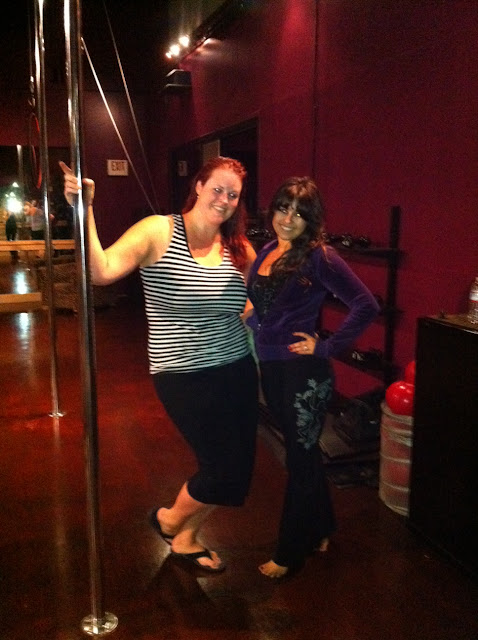 When zombie girls attack!  Oh, how I love my iPhone flash.
Posted by lolorashel at 12:24 PM