If you love pole dance/pole fitness, then you at least considered attending Pole Convention 2012.  In it's third year, PoleCon has grown from 500 attendees in DC in 2010 to 800 attendees in Miami in 2011 to over 1,000 attendees in Los Angeles in 2012.  The pole community is growing so quickly.

Rita and I arrived on Thursday, June 21, 2012 in time to attend the Pole Masters Cup.  Bel had arrived the day before as she was participating in X-Pert certification.  We had many Twirly Girls in the house: Yolanda, Diana, Kim, Grace, Shelly, among others.

Friday morning was quiet so we sat by the pool and hung out.  I had every intention of trying to get into Felix Cane's free workshop that afternoon but got distracted and didn't get in line in time.  That evening, we went to Polesque and AERA.  Unfortunately, I missed the cocktail party that welcomed everyone to the convention.

I did get to meet a lot of really awesome Facebook pole celebrities.  Jennifer from PoleSkivvies.  Lulu from America's Got Talent.  Roz The Diva.  John Janda and Stephanie Skyy.  Annette Artman.  Sam Green, pole photographer.  Leen Isabel!  The list goes on...  I mean, I got to drive STEVEN RETCHLESS in my truck.  We ate French fries together!  I got to meet my pole sister from Australia, Kym (who is on an adventure around the world practically)!

I very excitedly found my published articles in both Issue 5 of Vertical Art and Fitness Magazine (the black cover with Steven Retchless) and Pole Dance International Magazine (blogs with photos coming up soon). 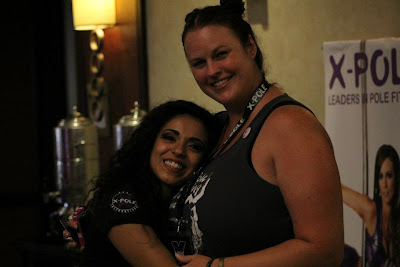 I had many intentions for the weekend.  I wanted to attend seminars and workshops.  I wanted to shop the vendors and meet people.  But what I ended up doing instead was watching.  I watched every single performance over the weekend.  Including the non-PoleCon shows, I videoed about 100 performances.  Part of me wishes I would have walked around more and experienced the convention.  But a bigger part of me is happy I have been able to provide videos for those who couldn't attend.

My true goal for the weekend was to have something epic happen.  When Nadia Shariff ran up to me and said, "Hey, I recognize those boobs," I felt like my weekend was complete.

I was really excited to be interviewed by Suzy Q for her documentary, Pole Life, and by Pole World News.

Below is a playlist for the Saturday morning solo performances, which included my new friends, Lulu and Roz.  Don't miss Clementine, the granny pole dancer:

Below is a playlist for the Saturday afternoon solo performances, which included our very own Shelly Lamb and good friends of Twirly Girls, Pantera and Natasha Wang:

Saturday night was the big Bad Kitty Fashion Show and Showcase of the Stars.  Not to be missed:  My new friend, Annemarie Davies as Napoleon Dynamite.

I was sad that Felix Cane didn't perform, but figured that maybe she was under contract with cirque du soleil.  She appears in the Michael Jackson Immortal Tour.  I stopped into the after-party, but was tired and ended up sitting in the hot tub and going to bed instead.

On Sunday, there was the Bad Kitty Spins and Tricks battle:

Sunday afternoon, the group performances lasted about three hours.  It was a long show, but I saw so many great performances.  I have so many ideas for new moves I want to try and only wish I had created an index of cool moves as we went along so I don't have to watch ten hours of video to remind myself.  Don't miss our Twirly Girls, Shelly Lamb and Grace Garcia!  Our sister studio from Nor. Cal., Poletential, also performed.  Check out Golden Eye for some hot mamas!  After watching Kelly Maglia's Vertical Theater demo, I am definitely trying to figure out how to make a second trip to LA in October so I don't miss it.

My only complaint has to do with the venue.  We were at the Marriott LAX.  They over-sold the hotel and didn't seem to care (there are so many horror stories to even list them all here).  Their internet was also terrible.  For a place that advertises itself as a convention center, you would think they would have a stronger signal for all of those vendors trying to run credit card sales off of their phones.  Even though it's not PoleCon's fault that the hotel was terrible, I guess I would hope that they wouldn't use them again as I watched the hotel be completely rude and unhelpful to their attendees (although for every employee that irritated me, there was one that was awesome.  I guess 50-50 isn't half bad.  No pun intended.)  ;-)  I imagine that next year's event will be in another part of the country, so the chances of returning to LA (or this venue) are slim to none.  Many of us have been debating where the next convention will be.  Although our crowd selfishly hopes it will be in San Francisco, I imagine it makes sense to move it to the middle of the country somewhere, although maybe not Chicago since the Midwest Pole Competition is in that area.  I'm sure they already know where it will be.  Jessalyn says that it takes 13 months to plan each convention.

So, while we are waiting to hear when and where PoleCon 2013 will take place, Bel has decided that I must do a Viking Warrior routine next year.  I am extremely nervous and need to start training a little harder to even pretend to be on par with the performers I saw last weekend.  But I also think it could be a lot of fun and I am game to try.  Maybe I should start trying to perform locally so I can lose that whole sweat-over-every-inch-of-my-body thing that happens now when I get nervous.  Doesn't really go well with pole dancing.

If you were at PoleCon, please tell me your high and low lights!  I'd love to hear about what you liked and what you'd change.
Posted by lolorashel at 2:16 PM