Warning:  With videos, this will be a long one.  Feel free to skip around if you can't sit still for very long.  :-)

On Friday, after workshops, they had a pole jam.  A pole jam is an informal gathering of pole dancers to hang out, chat and dance together.  I was such a pole geek.  First and foremost, I met fellow blogger, Aerial Amy, who was hanging out with Poletential instructor, Ellen Lovelace.  I also saw Natasha Wang, Alethea Austin and Amy Guion.  I met Karol Helms and Marlo Fisken in person for the first time.  Estee Zakar and Sarah Romanowsky (silks) were the last two pros who were in the showcase but they were not at the pole jam.

Rita and I mostly hung out and chatted with people.  We didn't pole.  We checked out Alethea's and Karol's awesome merchandise.  We talked with Christina A. from Poletential, who was a pregnant M&M at their Twirloween event, so she will always in my mind be the green M&M.  We also got to see our good friend, Tracey.  Poletential Owner, Christina Kish, was also there.  The studio was hopping with people preparing for Saturday's show.

Marlo, Natasha and Amy wanted to head back to the hotel and I happened to have my monster truck with me, so I offered to drive them to pick up food and then take them back to the hotel.  Of course, who wouldn't want to have the adorable booties of those three ladies imprinted in their car?!  On the drive, we talked about Natasha's recent blog about body image (check out my response HERE).  Marlo said that she doesn't want to get kudos for something unless she actually pulls on some amazing move.  I said that when I climbed to the top of the pole, we almost threw a party.  However, for me, that WAS an earth-shattering move!  They are professional competitors, so their standard of excellence is much higher than the average pole dancer.

Saturday was the Air Show.  I sat near a group of super fun ladies.  I met Tina Kelly, owner of Venus Pole Fitness of Turlock and I plan to do a Poletry in Motion for her studio soon.  She promised to come to Twirly Girls one day too.  I don't want to take much too much space talking about the show since the videos will speak for themselves.  After the show, Amy Kim did ask me my top two performers.  It was so hard to say since I loved each and every performance for a different reason.  Shelly Lamb made a great comment, saying that she had competed with most of these girls in New York and it was so different to see them in a showcase setting instead of a competition setting.  They were so much more relaxed, which I'm sure made it much more fun to perform.  Anyway, back to Amy's question.  I told Amy that I had to give it to Marlo because I LOVED her rockin' song (all of the other girls performed to slow songs, which I totally love and respect since I have a hard time dancing to slow songs, but I always love the down and dirty rock songs!).  I also had to give it to Natasha, since she is my personal favorite.  She always responds to me on Facebook and I'm doing a workshop with her tonight at Twirly Girls.  She is such a lovely and graceful dancer.  However, Amy Guion's performance was so beautiful and the smile on her face during her entire performance was amazing as well (her theme for the dance was dreaming of being a princess).  And, although Alethea danced to a slow song she oozed sex and pure awesomeness, as usual.  This was my first time seeing Estee Zakar, Marlo Fisken and Karol Helms perform.  They were all crazy off the hook as well (I'm running out of adjectives to show much I love this show)!  So it was hard to pick my top two favorites.  They were all my favorites for different reasons.

This show also contained a lot more silks.  My very own silks teacher, Sarah Starlight, performed with her friend, Jennifer.  She did such a great job!  Also, Sarah Romanowsky, who performed at Twirloween, and who has been chatting with me on Facebook and Twitter, performed on the silks.  I really loved her outfit and I wish I had her hip bones!

I have to say the show opener and scene stealer was Christina's imitation of Alethea.  Oh.  My.  God.  When I first saw the blonde hair and stomach tattoos from afar, I knew it was Alethea.  There was something off.  Different.  I couldn't put my finger on it.  But no one else in the show had a tattoo on her stomach like that.  The rockstar swagger was there.  I was slightly shocked they'd have a pro actually start the show, but maybe she had somewhere to go and needed to leave early.  Then it hit me.  THAT WAS AN IMPOSTER!  This is best viewed on video because I can't give Christina enough kudos for her act.  And Alethea is clearly a good sport.  Man, what a great intro!

Anyway, check out the videos below and then I'll finish up with some photos, my Sunday class and my impression of the whole weekend at the end:

I loved Estee's music.  It's kind of industrial and animalistic.  She has an amazing body and such muscle control!  I also really liked her costume!

Like I said, Amy's sweet smile really made this performance.  I totally love the princess theme too!  She too has amazing muscle control and a beautiful body!

As Karol herself said on Facebook, my angle captured her asstastic beginning!  Perfect song too.  She certainly does move in mysterious ways.  Such control!!

Alethea...what else can you say about her?  So sexy.  Those body rolls are so awesome.  I want to do everything she does!!  I think I'm like a day or two away from being able to pull off her moves.  Or not.  ;-)

Sarah is so beautiful on the silks. Such flexibility and grace!

When I took Natasha to the hotel, Rita and I wondered why she had a basket of apples.  We were like, look how healthy she is!!  We told her she could re-enact the Twilight cover.  She said that was fitting since her dance was wolf themed.  Now we understand...  lol!  I loved the Red Riding Hood/Big Bad Wolf theme!  It might be hard to see in the video but she had make up that made it look like the Wolf had really kicked her ass!

Marlo apparently had to change her routine around because stage poles are not as steady as those attached to the ceiling.  She definitely pulled off a rockin' routine.  I guess her song doesn't count as a true "down and dirty rock song," but I pretty much count any fast music as down and dirty.  :-D

I finished off Air Show weekend by taking aerial hammock with Ellen Lovelace and Aerial Amy.  I live an hour away from Redwood City, so I got home Saturday night around midnight but didn't get to sleep until 1 a.m.  I got up at 7 a.m. on Sunday to get to silks on time.  I thought I'd be super tired but I was fine.  And I loved Ellen's class.  It was different than Jessica's class.  I was actually able to do most of the moves.  Other than a couple of moves that aggravated my old lady hip, I think I held my own.  I even did two...count them TWO....back somersaults!  Well, Ellen helped me because there is a point when I'm upside down that I swear I'm going to lose my grip and fall on my head -- but I did it!!  ("Did it" meaning I did the somersaults, not the falling on my noggin.)

Poletential put on another awesome show.  And thank you for always being so welcoming and kind to the Twirly Girls!


Me with Aerial Amy and Ellen Lovelace at the Pole Jam 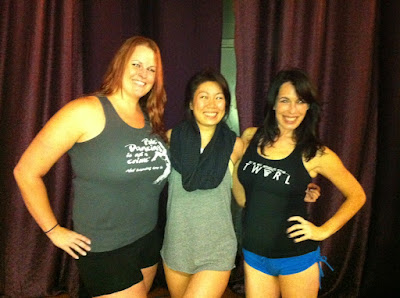 Rita, Marlo Fisken and me at the Pole Jam 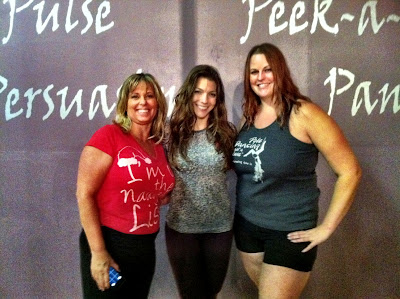 Karol Helms and me 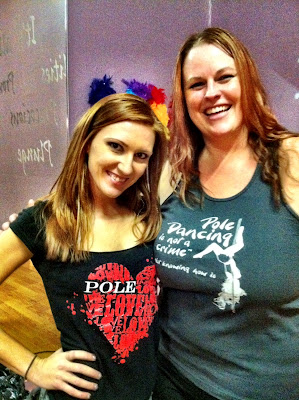