October Blog Hop: Stripping the Stripper out of Pole Dance 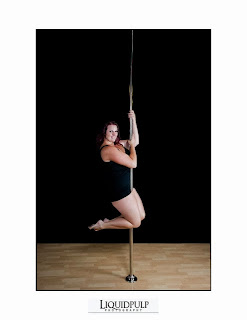 This month, the Pole Dancing Bloggers Association is talking about the sanitization of pole dance.  This Trick or Treat blog hop marks the first anniversary of our blog hop!  I feel very fortunate to be surrounded by so many talented pole dancers and writers!  Happy birthday to us!

So back to the topic at hand...I have written on this subject many times before and thought this might be a good time for a recap!

Way back in March of 2010, I weighed in on the debate about pole in the Olympics.  The push was (and still is, for some groups) to remove the "sexy" from pole in order to make it more palatable for the general population and the Olympics.  My response was, and still is, "meh."  I don't really care if pole dancing makes it into the Olympics.  I now understand what a great undertaking it will be to even have it considered.  The Olympic Games are chosen YEARS in advance, and although there is a group working hard to make it reality, it will probably be another 12 to 16 years before it could even be a possibility.  So, the people who would most likely be competing in the first Olympics to include pole, probably aren't even born yet.

In February of 2011, I discussed stripping versus pole fitness.  I mostly list other blogs which have discussed the topic, but my general feeling is this:  "...for me to look down on stripping and call myself only a pole fitness enthusiast would be almost disrespectful to the roots of my sport.  I have said on many occasions that if I had a better body and a little more rhythm, I wouldn't be opposed to making some money as a stripper!"

Only a month later, the topic came up again.  Mostly I discuss with myself the reasons that stripping automatically turns into prostitution in some people's minds.  Do all strippers have to get sucked into the dark side of drugs and prostitution?  I had only one person respond to my questions, and I'd love to get more opinions on the subject.

In January of 2012, we were discussing the stripper versus pole dancer debate...again.  In it, I mention my foot in mouth syndrome, and it is where I realize I cannot make everyone happy.  Some people are okay with pole dancing being sexy.  Some people are not.  One of my favorite quotes is from Claire of The Pole Story:  "If for some reason, the idea of your dancing being connected to the strip club scene is upsetting to you, if you desperately need to distance what you do from what those 'other girls' do, if you truly believe that you are doing this because it’s just a really good workout, then I strongly suggest you spend some time thinking about why you chose pole dancing.  Because there are a million ways to get fit without putting on six inch stilettos, a bikini and swinging sensually around a pole." 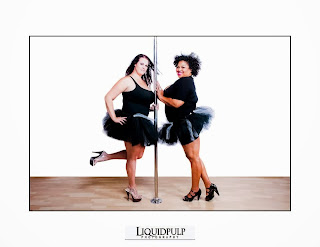 The winning quote of the day, though, came from Shimmy's blog:  "It's completely normal that not everyone will like what you do. As the pole movement gains momentum, and new skills are created, it's going to get harder and harder to impress people. People will become more discerning, and competitive. Sometimes, people will comment on other people's style of dance as a way of defining their own style. An example of this is a traditional 'sexy' pole dancer saying she doesn't like contemporary pole, or a former ballerina saying she hates body rolls and hair flicks. What they're really saying is that they've adopted a particular style as their favourite way to pole dance, to the exclusion of other styles. That's ok too - there's room enough in the pole world for many different ways of pole dancing, and it's quite exciting to see new styles develop and change."

In February of 2012, Twirly Girls was asked to perform for a local radio show.  The show later accused one of our girls of being a "bitter stripper" after she was a little defensive in answering their questions.  I didn't want her to feel attacked but part of me thought, "Who cares if she was a stripper, bitter or not?!  It doesn't make her any less of an amazing pole dancer."  I struggled then, and sometimes do now, to make sure I don't force my own opinions on everyone else:  "I don't want to disconnect from my pole community either.  If it is offensive to some to be called a stripper, am I belittling them by telling them to get over it?  On the other hand, do we owe it to the 'pole fitness' community to explain to the general public that there is a bit of a difference between stripping for dollars and taking classes at a pole fitness studio?  Granted, I like working out and feeling stronger but I really enjoy putting on 'stripper heels' and cute clothes too."

"It seems like a lot of the negativity and disharmony comes from WITHIN our own pole dancing community. Some spend so much time debating the words we should use to describe what we do -- and even more time judging other dancers in the industry.  I think we need to first band together, then we can worry about what the outsiders think."

And, finally in June of 2012, I wrote about the difference between "pole fitness" and "pole dancing."  I also discussed the World Pole Sport Championship, which is part of the push to get pole into the Olympics.  "I feel like pole fitness competitions or showcases usually leave the six inch stilettos out.  They seem to be more tricks/contortion-based.  And I feel like pole dancing competitions should encompass the beauty of the dance, sexy or not, and may or may not include shoes (perhaps this is where the difference between pole art and pole exotic might come in)."

For me, I love the art and the dance.  I also love the strength and flexibility required.  I love Chinese pole, contortion and acrobatics.  I love ballet and jazz and the interesting dance pieces that are being showcased lately.  I love the costumes, crazy make-up and hair styles.  I love the shoes, but I love barefoot dancers too.  I love that women dance.  I love that men dance.  I love it all.  So, be sexy or don't.  Be sexy this routine and not the next.  I think what makes pole amazing is the ability for each performer to bring their own personality to each and every routine.  Also, some of the most memorable routines for me were ones that never won the competition.  However, they were interesting to watch -- some sexy, some not.  Be different.  Be interesting.  Be you.  That's what makes a great pole dancer.

Sorry this was a long one, but this is a debate we will probably have to endure for the rest of our lives.  How do you feel about being sexy in pole dance?

To read other blogs on this topic, please click HERE.